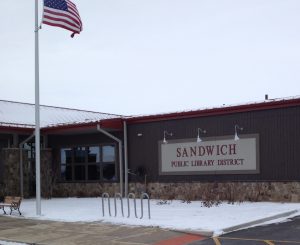 The Sandwich Library is collaborating with the Reason to Give foundation to host a Holiday Gift Drive. This drive will provide donated gifts to families in need for the holidays. (Photo courtesy of Sandwich Library)

Aurora Police are investigating reports from two senior citizens who were scammed into letting burglars into their homes.

A 76-year-old man, who police said is a retired U.S. Marine and not in good health, reported that a woman came to his door, knocked on it, and when he opened it, she pushed his way past him saying she needed to use the bathroom.

Due to his health issues and being caught off-guard, the victim could not immediately follow the woman. By the time the man could react, he found the woman gone, the back door open and his wallet with an undisclosed amount of cash missing.

He described the suspect as African-American, between 27- and 32-years-old, 5-foot-7 to 5-foot-10, 180 to 200 lbs., with short black hair. She was wearing all dark clothing. A dark blue SUV similar to a GMC Envoy with lower front end damage may have been involved. The victim was not injured.

Around 1 p.m. Friday, Nov. 16, a 71-year-old man who lives in the 300 block of Zengle Avenue, lost a significant amount of money due to a ruse burglary.

The suspect knocked on the front door of the victim’s house and told the man his roof needed repairing. The suspect succeeded in talking the man into taking him into the basement to check for leaks caused by the bad roof and then out to the backyard.

After the suspect left, the victim realized the cash was missing. It is thought that a second person entered the home and stole the money while the original suspect distracted the homeowner.

The suspect was described as Hispanic, about 35- to 40-years-old, 5-foot-7, 160 lbs. and wearing a green jacket and hat. He may have been driving a black pickup truck.

Anyone with information on either incident should call Investigations at 630-256-5500 or Aurora Area Crime Stoppers. Tips called into Crime Stoppers that lead to any arrests are eligible for cash rewards and all callers are kept anonymous.

Three Aurora Police officers have been named Employees of the Month for saving a suicidal man.

Officers Wes Boyer, Aaron Spooner and Irene Carollo were selected for their actions on a call for a man attempting suicide at a home on the Near East Side. Upon arrival to the call, the officers met with family members of the man who expressed a grave concern that he would take his own life. Minutes later, the man appeared on a roof, three stories from the ground.

Officer Carollo proceeded to a rear alleyway and began talking to the man to keep his attention, while Officers Boyer and Spooner called for an Aurora Fire Department ladder truck.

When the truck arrived and while Officer Carollo still had the man’s attention, Officer Boyer had firefighters raise him to the roof where he exited the ladder truck’s box.

Officer Boyer grabbed the man from behind, wrapped his arms around him, and pulled the man back. Paramedics were then able to assist and take the man to a hospital.

Because of the coordination and teamwork of Officers Boyer, Spooner and Carollo, the victim was taken out of harm’s way and to a facility where he could get the help he needed.

State Rep. Stephanie Kifowit, D-Oswego, encourages residents to help every child receive a holiday gift this year by donating new and unwrapped toys at her district office through Friday, Dec. 14.

“During the holiday season, it’s important to remember how many families struggle to make ends meet,” Kifowit said. “It is my pleasure, as a Marine Veteran, for my office to serve as a drop-off location for the Fox Valley Marine Corps League’s Toys for Tots drive.”

Kifowit is asking for donations of new and unwrapped toys, especially for children between 7 and 14. Popular toys include footballs, soccer balls, skateboards, sports equipment, board games, purses, and small electronics.

For more information and for a complete list of local Toys for Tots drop-off locations, visit www.toysfortots.org.

“As families shop during the holidays, I encourage them to think of the joy they can bring to a child in need by picking out a new or unwrapped gift for Toys for Tots,” Kifowit said. “Your act of kindness can make this holiday season one to remember for many children.”

On Nov. 21, members of the U.S. Marshals Service Great Lakes Regional Fugitive Task Force apprehended fugitive Stephen M. Adams in the 6900 block of Clearwater Drive in Plainfield. Adams, 55 and a registered child sex offender from Plainfield, was wanted on a Kendall County warrant for two counts of aggravated criminal sexual abuse and one count of attempted aggravated criminal sexual abuse.

The Kendall County Sheriff’s Office is investigating the report of multiple gunshots in the 0-99 block of Chatham Place, Montgomery, Oswego Township that occurred at approximately 1:40 a.m. Nov. 24.

Multiple Sheriff’s Deputies and Oswego Police Officers responded to the area, and were able to gather important information and evidence.

The investigation led Deputies to a residence on Chatham Place where the incident occurred. The shooting does not appear to be a random act of violence, and the Sheriff’s Office would like the community to be aware this appears to be a targeted incident involving illegal narcotics. This case is currently under investigation and the Sheriff’s Office said numerous citizens provided valuable assistance and information.

The Sheriff’s Office will be working with the Criminal Intelligence Team to heighten patrols in the area to ensure the streets remain safe for the area residents. Anyone with information related to this incident is urged to contact the Kendall County Sheriff’s Office Investigations Unit at 630-553-7500, ext. 1105.

If the public would like to remain anonymous on this or other crimes we urge them to call Kendall County Crime Stoppers at 630-553-5999. Callers remain anonymous and are eligible for a reward of up to $1,000 for information leading to the arrest of the offenders.

All sorts of new items are on display for gift giving or something new for yourself. Also shop a large selection of Holiday decorations perfect for any home.

The gift shop is always looking to improve its tock, so your donations of new or gently used items are most welcome. Small donations can be dropped off at the Oswego Senior Center reception desk. For larger donations, call the Center at 630-554-5602.

The library is collaborating with the Reason to Give foundation to host a Holiday Gift Drive. This drive will provide donated gifts to families in need for the holidays.

Visit the library to check out the Giving Tree display. Ornaments on the tree feature the names, ages, and interests of kids in need. Take an ornament home with you to help you pick out the perfect gift.

Bring your wrapped gift and ornament back to the library by Friday, Dec. 14 in order to make sure the kids will be able to open their present on Christmas morning.

After the holidays, visit the Reason to Give website: www.reasontogive.com to see how your gift made a difference.

Send your letter to Santa, get a letter back

Santa is checking his list and wants to hear from you this holiday season.

Letters to Santa can be sent to the city of Yorkville but must be postmarked by Monday, Dec. 10 (he is very busy this time of year).

Be sure to print your name, age, gender and address clearly on your letter, so Santa can return a letter to you without delay. Santa will then read your letter and send a response by Dec. 24.

All letters should be addressed to: