Several of the Aurora Police Department’s Community Policing Officers were busy with a recent undercover detail to assure the city’s pawn and second hand/jewelry stores are complying with ordinances that dictate the steps they must take when conducting transactions.

Police said 17 of the 21 businesses checked were found to be in compliance of the ordinances that require the shops to photograph all items taken in by the shop, thorough descriptions of the items, strict recording of information related to the seller and other details.

That information must all be uploaded to Leads Online which is a system used by the Aurora Police to help assure the transactions are legitimate and the items are not stolen.

A clerk at Jios Fashion also accepted an inappropriate form of identification from one of the undercover officers selling an item.

The violations will be forwarded to the city’s legal team for review and possible fines. 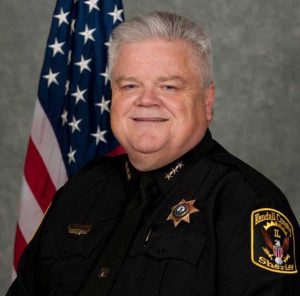 Undersheriff Martin has been a member of the Kendall County Sheriff’s Office since 2015. He has direct oversight of the Corrections Division, Records Division, and Training.

He has been in law enforcement for 43 years, having spent over 56 years in Kendall County. He spent his first four years as a police officer in the Village of Newark.

He was then hired by the Yorkville Police Department, where he spent the next 31 years, the last nine years there as chief before he retired in 2010.

He was then hired as the police chief of Pilot Point, Texas for two years before being hired as the chief of police in Manhattan, Ill. for three years.

He brings with him a strong back ground in reorganization and facilitating change within Law Enforcement Agencies. 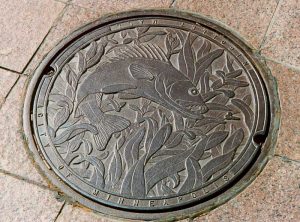 Artists and designers can submit to the village Oswego up to three different proposed designs for a manhole cover project before Thursday, Jan. 17.

The village of Oswego is seeking artists to submit proposed artistic designs for manhole covers to be placed throughout portions of downtown Oswego.

The project is an early step in establishing a vibrant permanent public art collection in Oswego, part of the mission of the Cultural Arts Commission, which has been laying the groundwork over the past several months to develop an aesthetic and guiding principles for a public arts program.

Approximately 20 manhole covers will need to be ordered for new developments in the downtown, including streets around the Reserve at Hudson Crossing and a pedestrian-friendly thoroughfare on the former Village Hall block.

“It might seem an unusual site for a piece of art, but we’re excited about the possibilities that might be out there to incorporate a little something unexpected in our downtown,” said Jenette Sturges, community engagement coordinator for the Village of Oswego. “Covers in a lot of American cities include city logos or symbols, but other countries get very playful with their manhole covers, turning a utilitarian bit of infrastructure into something engaging and fun. We are excited to see what local artists propose,” she said.

Since the new covers will need to be purchased for upcoming development projects, this call for artists allows the village to add to the public art collection at minimal additional cost.

The design for the manhole covers will be selected based on the artistic merits of the design and how well it builds upon the established aesthetic. Complete guidelines on how to apply, plus information on the downtown Oswego aesthetic and design constraints of the manhole covers are available on the Village’s website at www.oswegoil.org/business-and-development/bids-and-rfps.aspx.

Artists and designers can submit up to three different proposed designs each before Thursday, Jan. 17.

A selection committee, including members of the Cultural Arts Commission, Village staff, residents, business owners and other community stakeholders, will decide on approximately three finalist designs, which will be awarded $200 each. Following consultation with the manhole cover manufacturer, a single final design will be selected, awarded $1,000, fabricated, and placed throughout downtown. To submit visit www.oswegoil.org