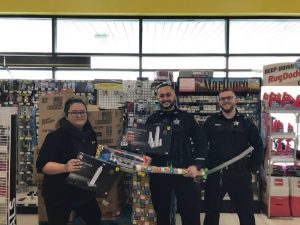 Aurora community oriented police officers, in conjunction with local school districts, provided gifts to area families who needed some help during the holiday season. In all, 61 families and 160 children were served. (Photo courtesy of Aurora police)

Two Aurora Police Officers, Ryan Murphy and Arturo Montemayor, were recently commended by the Aurora Police Department Command Staff for their recent actions when they responded to a Near East Side Aurora home that was on fire.

Officer Murphy was first on the scene and he observed flames and heavy smoke coming from the rear porch of the residence. He quickly found out that the only entrance to the home was through the burning back porch and there were six people still inside, police said.

When he entered the building, Murphy found the six people, several of whom were youths and one was an infant younger than a year old. He helped them down the stairs and got them outside while Officer Montemayor utilized the fire extinguisher.

Montemayor had the forethought to save some of the extinguisher’s contents for when Officer Murphy would exit.

Murphy then entered the building one more time to make sure no one was left behind. He then exited a final time while Officer Montemayor used the rest of the fire extinguisher’s contents to give him his best chance of escaping.

The Aurora Fire Department arrived and put out the fire. The only injury was to Officer Murphy who suffered smoke inhalation. He was treated at an Aurora Hospital.

A Kendall County real estate professional has been indicted on federal fraud charges for allegedly orchestrating a $23 million Ponzi scheme.

Michelle Labra of Yorkville owned and operated Labra Group Realtors LLC, an Aurora-based investment program that used the promise of outsized returns to receive $23 million from at least 25 investors from 2009 to 2015, according to an indictment returned Dec. 20 in U.S. District Court in Chicago.

Instead of investing the money, Labra spent approximately $19.6 million to pay earlier investors via Ponzi-type payments, while misappropriating more than $3.3 million for her personal benefit, including expensive jewelry and vacations in Jamaica, Mexico and Guatemala, the indictment states, according to the U.S. Department of Justice.

The indictment charges Labra, 47, with three counts of wire fraud and one count of making a false statement to the U.S. Treasury Inspector General for Tax Administration.  Arraignment in federal court in Chicago has not yet been scheduled.

According to the indictment, Labra claimed that investor funds would be used to make short-term, high-interest loans to borrowers, and that the loans would be secured by the borrowers’ residences.

Labra represented that investors would receive full repayment of the principal loan amount, a service fee paid by the borrower, and at least 14 percent interest on the loan, the indictment states.  In reality, Labra never entered into any agreements with borrowers.

Labra attempted to conceal the scheme by making false representations to investors about the reasons why she could not return their money or send them their purported gains, according to the indictment.

At one point Labra falsely claimed that IRS agents had issued levies and seized investor funds from the Labra Group’s bank accounts, the indictment states.  In reality, the IRS had not seized any funds or issued any such levies.

“Many selfless individuals dedicate their time and effort to help those in need and to improve our communities,” Kifowit said. “I want to thank every volunteer for their service, and I encourage residents to nominate great volunteers they know for recognition.”

The Governor’s Volunteer Service Awards recognizes individual volunteers through a statewide award program in efforts to promote volunteerism and community service across Illinois.

Residents can nominate a volunteer for the following categories:

“The work of most volunteers often goes unrecognized,” Kifowit continued. “I encourage residents to help change this narrative by submitting someone they know for the Governor’s Volunteer Service Awards.”

For more information or to submit a nomination, visit serve.illinois.gov.

Groot will collect Christmas trees curbside for free after the holidays through Friday, Jan. 11.

Place your bare tree, free of lights, ornaments, tinsel, or any other decorations by the curb on your regularly scheduled garbage day. Do not bag your tree or place a yard waste sticker on it.

New police HQ named as ‘Project of the Year’

The new Oswego police headquarters has earned its first accolade, as Project of the Year in the Fox Valley.

This week, the Village of Oswego was notified that the new public safety campus was named Project of the Year by the American Public Works Association Fox Valley Branch in the category of Structures — $25 million to $75 million.

“We planned this new police headquarters knowing that we wanted to create something special; not just a law enforcement facility, but a place that invites the community to be partners in public safety,” said Village President Gail Johnson. “That’s reflected not only in the design of the new station, but also in the way that so many people came together to make that vision a reality. This award recognizes all of their hard work and determination.”

“We are very proud of our new headquarters, and we’re pleased to be recognized with this award,” said Police Chief Jeff Burgner. “By working closely with our construction manager Gilbane and entrusting decision-making to a top-notch steering committee, we were able to complete the project on a very tight time frame of just 20 months, on time and on budget. This facility came together because of a lot of team work, from the architect to our policing staff, and I think this this award really reflects that team effort.”

The award also recognizes the role of partnerships throughout the community in building and operating the new public safety campus. That includes siting the new facility next to the Fire Station to share costs and increase training opportunities, creating space for organizations like the Kendall Co. Health Department to provide community services like counseling and assistance to victims, and even working with nearby developers to source discounted useable soil for construction.

The new police headquarters is also under consideration for Leadership in Energy and Environmental Design Silver Certification from the U.S. Building Council.

Among the building’s environmental considerations are: a solar tower that heats the lobby and sidewalk to reduce gas consumption and winter salting; lots of natural light to cut electricity consumption; native plantings to support biodiversity and reduce water consumption; and special care during construction to reduce waste and prevent soil, water and air pollution.

The full nominating document for the award, which details the construction of the new police headquarters from start to finish, highlighting innovative techniques to reduce project time and cost and improve the overall quality and efficiency of the new police headquarters, can be found on the Village’s website at: http://www.oswegoil.org/pdf/apwa-nomination-opd-2018.pdf. 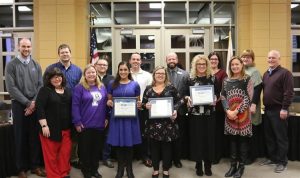 Community Unit School District 308 announced the 2018-19 November winners of the PRIDE (Proudly Recognizing Individuals Demonstrating Excellence) Recognition Program on Dec. 17 at the Board of Education meeting.

“We are proud to recognize these dedicated and committed individuals for their contributions of time and commitment they give to our students and our schools on a daily basis,” said Dr. John Sparlin, superintendent of schools.  “It is through their ongoing dedication and support that our students and staff achieve their goals.”

Each month, the program recognizes two teachers, one employee and one volunteer.  The winners for the month of November 2018 are:

Huntington Learning Center – Employee of the Month: Ursula Coan, executive assistant to the superintendent and the Board of Education at the District Administration Center

Chick-Fil-A – Volunteer of the Month:  George Bailey, parent from Oswego High School (Bailey was unable to attend and will be recognized at the February BOE Meeting)

An ideal free program that will help participants age 60 or more gain a clear understanding of what osteoarthritis is and how physical activity that is tailored to the needs of persons with arthritis can help them manage arthritis symptoms.

Come to the Oswego Senior Center, 156 E. Washington for this free, eight-week course to learn to perform safe stretching, balance, aerobic and strengthening exercises which will gradually increase exercise frequency, duration, and intensity over time.

Incorporate physical activity into your lifestyles by exercising three times/week for one hour. Participants can work to reduce arthritis symptoms. The program will develop individualized, tailored, multiple component physical activity programs that are sustainable after the program ends.