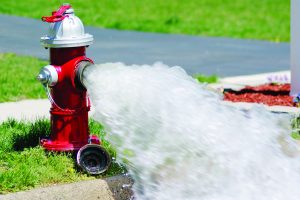 The village of Montgomery will be conducting the annual hydrant flushing throughout the month of April.

An Aurora man was arrested March 18 after a neighbor dispute ends with another man shot.

Abelardo Ramos, 26 of Aurora was arrested for aggravated battery with a firearm after he approached his next-door neighbor over alleged inappropriate comments made toward Ramos’ girlfriend.

According to reports, Christian Aguilera, 23 of Rolling Meadows arrived at a home in the 100 block of South Lincoln Avenue and made a disparaging remark to about Ramos’ girlfriend, who informed Ramos of this insult.

Ramos reportedly confronted Aguilera while brandishing a pistol, at which time a fight ensued. During the struggle, Aguilera was shot twice in the leg.

At 10:38 p.m. on March 17, Aurora police and paramedics were called and responded to the scene. An HK 9mm pistol was recovered, and Ramos was taken into custody. He was charged with (2) counts of aggravated battery with a firearm (Class X Felony). Aguilera was taken to a nearby hospital where he was treated and released for non-life-threatening wounds.

Ramos held a valid FOID card and a concealed carry permit. As part of the investigation, Aurora Police have submitted a Clear and Present Danger report to the Illinois State Police with a request that both be revoked.

At this time, Ramos remains in custody at the Kane County Jail awaiting bond.

Safe methods of disposal are needed for expired or unwanted medicines. Products of concern include prescription and over-the-counter medications.

Improper disposal of medicines presents both a public safety and environmental hazard and wastes millions of health care dollars annually.

The three main hazards are:

Remove or black out any personal information on the label to protect your privacy.

Take medications to the drop off site and drop off.

It is recommended that you contact the drop off facility to ensure availability and for any other instructions.

On Wednesday, Jan. 16, at approximately 1:40 a.m., off-duty Kendall County Sheriff’s Office Patrol Sgt. Mark Bunting was stopped by the Yorkville Police Department for speeding 120 miles per hour in a 45 mile per hour zone.

Bunting was charged with misdemeanor speeding by the Yorkville Police Department and provided a court date. The traffic case was adjudicated on March 13, and Bunting plead guilty to speeding over 35 miles per hour and was fined $500, with court costs of $117. He was also sentenced to 100 hours of community service and 12 months of conditional discharge.

Because of the sustained findings, Sgt. Bunting will receive a suspension, which will equate to the loss of a week of pay.

Sheriff Dwight Baird said, “The Kendall County Sheriff’s Office is committed to hold our employees to the highest of standards and conduct both on and off duty. Sergeant Bunting was very cooperative and forthcoming during the entire administrative investigation.

“Sgt. Bunting has shown deep remorse for his conduct and he realizes the impact it has had to the community. Sergeant Bunting has been a member of the Sheriff’s Office for 23 years and has served with pride and dedication; I will not judge his professional career by this one act, but by the totality of his accomplishments and service over his entire career. (Sgt.) Bunting accepted responsibility for his actions and plead guilty in his court proceeding, another example of his character.”

water mains in the Village and unincorporated Boulder Hill Subdivision during the weeks of April 8, 15, and 22.

This procedure clears sediment from the water distribution line, helps maintain water quality, and verifies proper operation of the hydrants.

Residents are encouraged to refrain from washing laundry when flushing is done in or near their neighborhood as the temporarily discolored water may cause laundry staining.

Residents should also run their cold water taps first to clean out any sediment that may enter the water lines inside the homes.

Public Works crews will flush hydrants from approximately 7 a.m. to 6 p.m. daily according to the following schedule:

(Boulder Hill Subdivision could take up to approximately six weeks to flush. This area will undergo directional flushing, this flushing has been proven to be very effective but requires increased time to complete)

Any resident with questions about the hydrant flushing program should contact Dave Martin, utility superintendent, at 331-212-9042.

Thinking about what to do during summer yet? Mark your calendars for the first Oswego Junior Public Safety Academy.

Formerly known as the Junior Police Academy, the class is now hosted jointly by the Oswego Police Department and the Oswego Fire Protection District.

Beginning April 1, applications will be available online and at the police department. Completed applications must be received by May 24.

Any questions should be directed to Officer Chmielewski or Officer Mumm of the Oswego Police Department at 630-551-7300. Each session will be limited to 25 students.