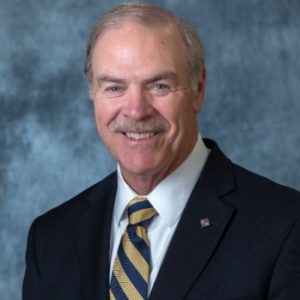 “Jim is an incredible leader who will help strengthen the presence of the Red Cross across our six-county chapter,” said Brian McDaniel, executive director of the American Red Cross of the Illinois River Valley chapter. “We are fortunate to have Jim in this role. He is the right person at the right time for the Red Cross.”

The Red Cross of the Illinois River Valley serves 1.1 million people in six counties in Northern Illinois including Kendal, Kankakee, Will, Grundy, LaSalle and Putnam.

Roolf is the senior vice president and corporate relations officer for First Midwest Bank. A graduate of the University of Notre Dame, Roolf has more than 40 years of experience within the banking industry. Since 1984, he has served on the Illinois Bankers Association’s Government Relations Committee.

He currently serves on the board of directors of several organizations, including Silver Cross Hospital, Will County Center for Economic Development, Joliet City Center Partnership and Chicago Regional Growth Corporation.

The following members of the board of directors have been elected to serve another three-year term:

Board members are selected based on their individual expertise as well as their commitment to the American Red Cross humanitarian mission.

U of I Extension educator to share safe canning

Whether just starting out or updating your knowledge, join University of Illinois Extension Educator Laura Barr for one of three upcoming seasonal programs on home food preservation.

“Canning is a simple, smart way to make the most of the fresh produce available this time of year,” Barr said. “Food preservation is coming back into practice, with more people supporting local economies, growing their own food or simply wanting to enjoy the taste of summer in the cold of winter. However, it is important to know the latest scientific updates on the canning process, as we preserve, serve and share our foods.”

The focus on evidenced-based practices and scientific principles is a mission of U of I Extension, said Barr.

During a “Yes, You Can: Preserving Food Safely” session, participants will learn the basics of food preservation, receive up-to-date food safety guidelines, understand the latest scientific methods, pick up recipes and ideas, and can have your pressure canner gauge tested.

“If you have a dial gauge pressure canner you need to get it tested once a year,” Barr added.

There are three choices throughout August for the “Yes, You Can: Preserving Safely” presentation. The dates and locations are as follows:

Register online at go.illinois.edu/extensiondkk. There is an $8 fee per person, which will cover the educational session and pressure canner gauge testing. Youth must be accompanied by a participating, paid adult.

Registration closes one week prior to each class, and space may be limited. If you need a reasonable accommodation to participate in this program, please contact your local University of Illinois Extension office.

Ignas Rolskis was sworn in on June 20 by Sheriff Dwight Baird. Deputy Rolskis will be attending Basic Police Training Academy beginning June 24 for 14 weeks. Upon completion of the academy, Rolskis will begin the field training program.

He will be paired with an experienced field training officer for a rigorous 16-week field training program.
Rolskis earned an associate’s degree from College of DuPage with honors. Prior to being hired by the Kendall County Sheriff’s Office Deputy Rolskis was working as a semi-truck driver at the American Highway located in West Chicago.

An ice cream party with prices from 1949 will close out the “Signs of the Times” exhibit at the Aurora Historical Society at the Pierce Art and History Center on Saturday, June 29 from noon to 4 p.m.

A sign showing prices for Valley Maid Ice Cream, c. 1949 hangs at the Aurora Historical Society at the Pierce Art and History Center which will host an ice cream party at 1949 prices June 29.

The Pierce Center is at 20 E. Downer Place.  Admission is free, but donations are appreciated.

The exhibit displays one hundred signs dating back as far as the 1880s, and includes signs from train stations, restaurants and bakeries, street corners, Phillips Park, political campaigns, schools and other aspects of Aurora history.  They are electric, neon, painted, printed, and even sewn.

There is a faded hand-printed sign announcing the appearance of John F. Kennedy in Aurora, put up just days before he won election to the presidency, and taken down only after his assassination three years later.

The exhibit is open Wednesdays-Saturdays from noon-4 p.m. and  June 29 is the last day.

The next quarterly recycling event for Montgomery residents will be on Saturday, July 20 from 8 am until 1 p.m. for electronics, rechargeable batteries, and household hazardous waste.

It will also offer paper shredding from 9 a.m. until noon. It all happens at the Public Works facility, 891 Knell Road (off of Route 31). ID required to verify residency.
Visit for complete details: https://www.ci.montgomery.il.us/195/Electronics-Recycling

Park Snapshot : Raintree Park B goes Hogwarts
All you Harry Potter fans will love the Castle themed playground at Raintree B Park. The park is located at 872 Prairie Crossing Drive on south end of Yorkville.

The playground is designed for children ages 5-12 and is wheel chair accessible. The playground area features a draw bridge and a sitting area with king and queen chairs.

Take your seat at the knights of the round table under the shelter to cool off or have a snack. This park has a walking trail with a group of workout stations along the way.

It also features a baseball field and sled hill. This park has off-street parking made of permeable pavers that was installed by a local youth group.

Adjacent to the parking lot are the city of Yorkville’s only lighted tennis courts. These tennis courts are named “Collman Courts” in memory of Jeffrey Dwayne Collman, who was a victim of the attacks on the World Trade Center Sept. 11, 2001.

He was aboard American Airlines flight 11 and was a member of the Yorkville High School Class of 1977.