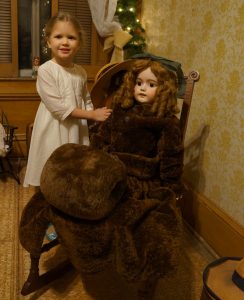 A young visitor poses in 2014 with a Victorian-type doll in one of the children’s bedrooms at the Tanner House. (Photo courtesy of Tanner House)

Tanner House Museum, 304 Oak Ave., Aurora (corner of Oak and Cedar) in the historic Tanner District on the near west side of Aurora presents docent-led tours are Wednesdays and Sundays at 1, 2 and 3 p.m. through Sept. 29.

The house will reopen for holiday visitation on Dec. 8, from 1 to 4 p.m. on Sundays and Wednesdays and from 4 to 7 p.m. on Fridays through December. 29 (closed Christmas).  All regular tours are free, but donations are appreciated.

Sheriff Issues Appeal to Citizens in Fight Against Crime

Responding to the increasing number of people wanting to assist law enforcement officials and build a stronger partnership in the fight against crime, Sheriff Dwight Baird recently announced that county citizens are being invited to become Associate Members of the Illinois Sheriffs’ Association.
Membership appeals will go out in the mail shortly. Individuals choosing to join the voluntary program can do so for as little as $20, while businesses memberships begin at $50. The funding provides critically important technical resources, training, and legislative support on key criminal justice issues.
Contributions are tax-deductible, and unlike other organizations in our state, the Membership Program does not solicit membership by telephone.
“With government funding becoming increasingly difficult to secure, the membership drive has taken on greater importance than ever before,” said Sheriff Dwight Baird. “The funding is vital to helping us carry out our mission of making our communities safer places to live, work and play.”
The program is committed to its “No Telemarketing” policy and only sends invitations to citizens to become members by mail. Individuals that do not receive a membership appeal and would like more information can visit online at www.ilsheriff.org or may call or write to: Illinois Sheriffs’ Association; 401 E Washington Suite 1000; Springfield, Illinois 62701 Phone: 217-753-2372.
Residents can also get information about becoming members of the program by contacting the Sheriff’s Office.
The membership program was formed to provide citizens with an opportunity to lend their support to more effective law enforcement and to help local law enforcement officers protect the lives and property of citizens..

“I encourage everyone receiving a membership appeal to consider joining forces with us by becoming an Associate Member. It is a valuable investment in the future,” added Sheriff Baird

The Kendall County Sheriff K9 Unit is hosting a fundraiser from 10 a.m. to 2 p.m. on Saturday, Sept. 28 at Prairie Pointe Park in Oswego in the effort to raise funds for the purchase of the department’s next K9 to serve the great citizens of Kendall County. K9 Palooza will feature demonstrations from the current and retired K9’s of the Sheriff’s Office, Schutzhund Trials demonstrations from Windy City IGP, and other service/competition dog disciplines.

Come join the KCSD for great BBQ from 5 B’s and meet the dogs of Kendall County. Food service from 11 a.m.-1 p.m. Event attendance is free but donations are appreciated. Tickets only needed for food service.

The Montgomery Police Department is now accepting applications for the department’s inaugural Citizens Police Academy. This will provide the selected applicants an opportunity for hands-on instruction regarding police procedures and various techniques.
The behind-the-scenes look into the Montgomery Police Department will include demonstrations, presentations, and other informative police related topics. The academy classes will be held on Tuesday evenings from 6:30- 8:30 p.m. beginning Oct. 15 and will conclude with a graduation reception on Tuesday, Dec. 17.

Interested candidates must be Montgomery residents at least 18 years of age and have no felony convictions. Space is limited to 20 people and will fill up quickly. Applications are available online on by visiting the village website (https://www.ci.montgomery.il.us/687/Citizens-Police-Academy) and must be turned in no later than 4 p.m. on Wednesday, Sept. 25. Selected participants in our first academy class will be notified by Friday, Oct. 4 of their acceptance into our Citizens Police Academy Class.

Ground has broken, and construction is about to begin on a new three-story mixed-used building and public improvements in downtown Oswego.
Oswego Village President Troy Parlier, the Oswego Village Board, and Imperial Investments Director of Development Mike Mann shoveled the first dirt on Sept. 11 at 113 Main St., the site of the former Village Hall, for a $3.1 million three-story mixed-use building that will bring restaurant space featuring garage door-style al fresco dining and upper level office space to downtown Oswego.
“This is an exciting, exciting day. Mike has and extraordinary vision being from Oswego and an extraordinary pulse on the buildings that are going to really turn this downtown into a much greater downtown but keep the feel that we all want,” said Village President Troy Parlier. “This isn’t a one-shot deal. We’ve found a partner that we can really work with. This Block 11 is really going to come alive over the next few months.”
The groundbreaking ceremony also marks the start of public improvements to the rest of Block 11, the downtown Oswego block bounded by Washington, Main, Van Buren and Adams streets. When finished, Block 11 will also include a Mexican restaurant along Washington Street, plus additional public parking, underground water, sewer and electrical infrastructure to support further development, and a complete reimagining of the streetscape featuring a pedestrian thoroughfare.
“We’re really excited to be in Oswego now,” said Mann, himself a 20-year resident of Oswego. “I want to see stuff happen here like it’s happened in other communities.”
Mann also hinted at what will be coming to first-floor restaurant space – an independent restaurant with locally sourced meat and produce.
Yorkville-based Imperial Investments is the team behind the development that houses the popular Crusade Burger Bar and other businesses in downtown Yorkville.

As a part of the deal between the village and Imperial, Imperial Investments is responsible for all the costs of private improvements, while the village will invest in the public improvements, including the publicly owned alleyway, parking and underground infrastructure, to support the development of the entire block.

Work on both the new building and the public improvements will begin immediately.

The Oswego Fire Protection District and Oswego Police Department will be holding an open house event on Saturday, Oct. 5 from 11 a.m. to 3 p.m. at their locations on Wooley Road in Oswego.
Both stations will be open to tour. Events include:
• Live Demonstrations
• Meet and Greets with local fire fighters and police officers
• Opportunities to get yourself fingerprinted
• Obstacle courses to traverse
• Drone demos
• Meet “Pumper the Fire Pup”
• Go inside a real jail sell
• Go through the department’s safety trailer
• Enjoy hot dogs and popcorn
There will also be drawings to win a ride to school in a fire truck and a police squad car.

On Tuesday, Sept. 10, at approximately 3:30 p.m., Oswego Police were dispatched to a home in the 500 block of Torrington Court for a domestic incident.

No gun was actually displayed however the caller reported the man was known to possess a gun.
A responding officer encountered the vehicle heading east on Wolf’s Crossing Road between Douglas Road North and Douglas Road South, at which time the driver pulled off the road and fled from the vehicle leaving it on the side of the road. The man was last seen running into the subdivision at the northwest corner of Wolf’s Crossing Road and North Douglas Road.

Oswego Police immediately converged on the area, and began searching for the individual. A canine search was conducted and a drone was deployed to aid in searching the area, including the grounds of the Fox Bend Golf Course.

Wolf’s Crossing Road was shut down between Southbury Boulevard and South Douglas Road and two schools and a child care facility nearby were placed on lockdown out of caution.

Police were able to establish phone contact with the man and determined he had been picked up by an acquaintance and had traveled out of the Oswego area. Wolf’s Crossing Road was closed for approximately one and one-half hours.
Oswego Police are not identifying the man at this time however they are still actively investigating the incident and do not believe there is a threat to the community.
Oswego police were assisted by Naperville Police Department Canine Unit, Montgomery Police Department, Kendall County Sheriff’s Office and the Illinois State Police. 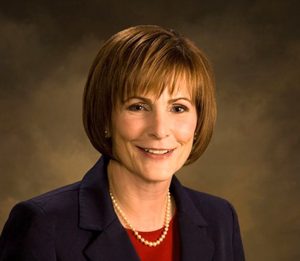 Building upon its work from the Vision 2050 project and its recent Transformational Plan, a team began developing, sharing, and refining the goals of the Waubonsee Community College FY2020-FY2022 Strategic Plan.

Those goals and ideas were then organized into three pillars: 1) student equity and success, 2) community connections, and 3) employee and organizational excellence.

Each goal, priority and other related initiatives supports the school’s primary objective “to be the top choice for learning in our community,” stated Christine J. Sobek, Ed.D, WCC president.

“Initiatives like our Council for Access and Inclusion, our work to strengthen a college-going culture throughout the community and our continuing focus on careful stewardship of resources, build upon our strong history of 53 years of quality education while transforming us to meet the needs of our community today and into the future.”

Sobek added that WCC as to “continuously refine and reinvent based on the ever-changing world around us.” and the school plays a large role in the broader community.