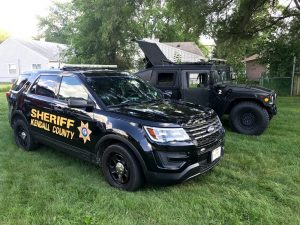 The Kendall County Sheriff’s Office has canceled this year’s Youth Police Academy, scheduled to begin in June, because of ongoing concerns related to the COVID-19 outbreak. (Photo courtesy of the Kendall Co. Sheriff)

Woman charged with spitting in nurse’s face
An Oswego woman was arrested and charged after she spat in a nurse’s face at an Aurora hospital while claiming to be infected with COVID-19.
Just after midnight on Monday, May 11 Aurora police were called to Mercy Hospital in Aurora to assist hospital security after a woman, identified as 33-year-old Cynthia Meyers of the 200 block of South Springbrook Trail in Oswego,  claimed she had tested positive for COVID-19, reportedly spit on a nurse and walked out of the hospital.
Officers responded to the hospital and learned that Meyers had checked herself into the hospital for trouble breathing.

Medical staff at the hospital was giving her medical treatment, but after some time, Meyers decided she wanted to leave, according to police. The nurse told her she needed to sign discharge paperwork before leaving the hospital, but the woman refused, lunged towards the nurse, and spit in her face, according to police.
The case was reviewed with the Kane County State’s Attorney’s Office, who authorized the charge of Aggravated Battery to a Nurse, a Class 3 Felony.

State Rep. Stephanie Kifowit has been appointed to the Governor’s Challenge to Prevent Suicide among Service Members, Veterans and their Families.

The Illinois delegation that Kifowit, representative of the 84th District, joins is in conjunction with the U.S. Department of Veterans Affairs and the Department of Health and Human Services’ Substance Abuse and Mental Health Services Administration.

The Governor’s Challenge delegation team is led by Dr. Theresa Glaze, chief of social work for the Illinois Department of Mental Health.

The delegation team is comprised of both public and private sector experts to develop an implementation plan to prevent suicide among service members, veterans and their families in conjunction with the U.S. Department of Veteran Affairs national strategy and incorporating best practices from the U.S. Centers for Disease Control.

Kifowit said she brings not only a veteran’s perspective to the group, but also experience working for veterans as chair of the Illinois House Veterans Affairs Committee and the Illinois Taskforce for the Prevention of Veteran Suicide, and her involvement on the local level with many veteran organizations.

“I am proud that Illinois has accepted the invitation to be a participant in The Governor’s Challenge as we continue to fight for our veterans and their families, so that they can receive the support they need and prevent veteran suicide,” said Kifowit. “We must continue to do everything we can to honor the service of those who have served and are currently serving, and their families by being there for them.”

For information about the Governor’s Challenge or efforts to prevent suicide among veterans, contact Kifowit at stephanie.kifowit@att.net.

Kendall County Sheriff’s Office launched a new online reporting system that will allow residents to file certain police reports online.  Examples of eligible reports include identity theft, damage to property, and suspicious circumstances. Some reports, such as a theft of a firearm, among others, will still require an in-person meeting with a deputy.
Those wishing to file a report online will answer a series of questions to ensure the report meets the criteria for online reporting. Once the online form is completed, an email confirmation from the Sheriff’s Office will be received within three business days with the report number and instructions explaining how to obtain a copy of the report.

If the report does not qualify for the online reporting system, an email will be received indicating the report does not meet the criteria for online reporting. The email will also contain a request for a convenient time to meet with a deputy so the report can be filed in person.
Sheriff Baird said “The goal of the Sheriff’s Office is to provide the highest level of service to the citizens of Kendall County, and this online reporting system is a tool that can be used to accomplish that goal. This system will allow citizens who wish to conveniently file police reports online to do so, and will allow the Sheriff’s Office to more efficiently allocate our resources. This is all done while making the reporting process more efficient and easier to access for our citizens.”

This decision was ultimately made in the interest of the health and wellness of the students participating in the program and the deputies and instructors assisting with and facilitating the Youth Police Academy, the Sheriff’s Office announced.

The 2021 Youth Police Academy is tentatively scheduled to begin in June 2021 with the application process expected to begin in March 2021. Keep an eye on our social media accounts and the Sheriff’s Office web page for further information and application instructions.

The Montgomery Beautification Committee will be sponsoring a Summer Floral Display Recognition again this year.

This is an opportunity for homes and businesses to be recognized for exceptional landscape displays that feature annual and perennial flowers.

Beautification Committee members will give recognition awards to those homes that best meet the contest criteria: displays must be predominantly floral; live plants only (no artificial, silk, etc.); flower displays may be in ground or containers; perennial and annual flowering plants are acceptable; and the display must add “curb appeal” to the property. Residents can nominate their own property or someone else’s simply by submitting the property address.

On Wednesday, June 17, committee members and volunteer judges will visit all nominated addresses in order to select the winners. A sign will be placed that evening in front of the properties selected for recognition.

Owners are asked to leave these signs up for two weeks, at which time a member or volunteer from the Beautification Committee will go around and collect the signs.  A list of winning addresses will be published. Names will be withheld.
Nominations will be accepted up through Sunday, June 14 and judging will take place on Wednesday evening June 17. You can nominate a property via the village website or by calling the Public Works Department at 630-896-9241.

Spring Cleanup Week is back

The collection, originally scheduled for April 20-24, was postponed to help protect waste haulers and slow the spread of COVID-19.
During this cleanup, Groot will collect additional household waste and bulk items for all Village residents, on your normally scheduled garbage day, for free.

No stickers are required during free cleanup weeks.  Simply put your additional trash at the curb by 6 a.m. on your garbage day.
Free yard waste collection has passed and will not be included in this Spring Cleanup collection.
Residents cannot put out appliances or televisions.

Call Groot at 630-892-9294 to schedule a pick-up for these items.
All other garbage and recycling restrictions have been lifted as of Monday, May 18. Residents are still asked to throw their recyclables in the trash if someone in their household is ill.
Sign up for the latest information via email from the village of Oswego. Visit oswegoil.org and click on E-mail Alerts.