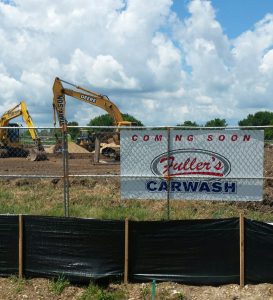 Construction is underway at Andy’s Frozen Custard, which is expected to open in August at the intersection of Routes 30 and 34 near the LA Fitness in Oswego. (Photo by Erika Wurst/for Chronicle Media)

From frozen custard to car washes, restaurants to liquor stores and lightning speed internet, there’s plenty of new businesses coming to Kendall County soon that residents should know about.

“There’s been a lot of interest in the village lately,” Oswego Village President Gail Johnson said of Oswego’s success in bringing sought-after business to the area.

The highly-anticipated Five Guys burger restaurant is expected to open in October where the former Dominick’s gas station used to be at Route 34 and Douglas Road. In August, Andy’s Frozen Custard will open it’s doors next to LA Fitness at Routes 30 and 34.

The former Roadhouse Bar and Grill, near Oswego High School, is also getting a makeover. The building will be torn down and turned into an O’Reilly Auto Parts.

“I’m very happy not to have a bar in that area,” Johnson said.

Add to that a Tide Dry Cleaners on Orchard Road, Sage’s Meat Market, and Metronet — a fiber optics communication company — business seems to be booming in Oswego.

“We’re a regional shopping hub, and we want to continue to be that,” Johnson said.

All of this comes at a time when Oswego is without and Economic Development Director. Former director Vijay Gadde left the position in April following a heated argument with trustees at a village board meeting for failure to meet their expectations regarding his business recruitment strategies. He came to Oswego in February 2013. 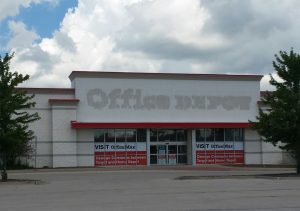 The now vacant Office Depot on Routes 30 and 34 in Montgomery will be the future home of Binny’s Beverage Depot, Mayor Matt Brolley announced on Friday, July 8. (Photo by Erika Wurst/for Chronicle Media)

Village staff and trustees are in the process of hiring a new director, following much discussion about their expectations of the potential candidates.

“We’re hoping to find the right person. We’re not going to hurry into this,” Johnson said. “We’re going to get this one right. It’s really important.”

That’s because, economic development, and the person in charge of it, are essential to Oswego residents, she said.

“The more shops we have, the more money is spent here,” she said.

On Friday, Brolley announced that Binny’s Beverage Depot will be moving into the old Office Depot building next to JC Penny’s and Sam’s Club at Routes 30 and 34.

The deal, which has been in the works for approximately one year, was a big one for the village to land, the mayor said.

At the Orchard Road and Route 30 corridor, construction is underway on a Fuller’s Car Wash, as well as a two-unit building that will be home to a cell phone and mattress store.

“It’s nice to see these old lots get filled,” Brolley said of the projects. 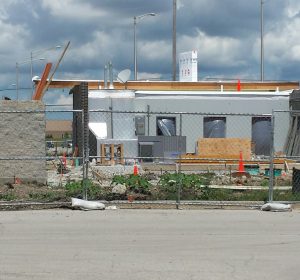 : Construction is underway at Andy’s Frozen Custard, which is expected to open in August at the intersection of Routes 30 and 34 near the LA Fitness in Oswego. (Photo by Erika Wurst/for Chronicle Media)

With the building of the Stuart Sports Complex on Jericho Road, Brolley is also hoping to draw the attention of a hotel willing to come to the village.

“Jobs and development, inside or outside the town, are good for the area,” Brolley said. “(Economic development among towns) is probably less competitive than people assume. I have a good relationship with Gail Johnson and Mayor Weisner (of Aurora). In my personal opinion, if Binny’s went inside our outside Montgomery, the revenue and activity is good for the area.”

“Local friends. … you guys have got to try out this place!!!  Their hamburgers are pure and simple fantastic!!” a Yelp reviewer raved online.

Southbank Original Barbecue, which shares space with Freeman’s Sports at 129 E. Hydraulic, along the Fox River, is also open for business. Live music on the river accompanies barbecue favorites like tri-tips and pulled pork.

Just across the street from Southbank, at 226 S. Bridge St., a former law office has been transformed into the Law Office Pub & Music Hall. The pub serves craft beer and features live music.

Both Brolley and Johnson said there are additional things underway within their villages that residents will be excited about.

“There are some other things in the works, and as soon as I can talk about them, I will,” Johnson said.

Until then, there’s plenty coming for shoppers.