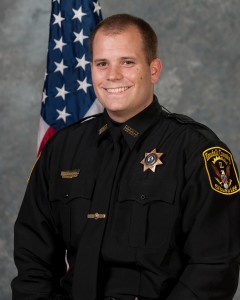 When Kendall County Deputy Tyler Johnson rushed into the frigid waters of an Oswego retention pond on New Year’s Day to save the life of a woman who was trapped inside her sinking vehicle, he never expected what would ensue in the days to follow.

“I didn’t expect things to go to the level that they did,” Johnson said of being hailed a hero. “It’s still kind of surreal.”

Compounding the media interviews and television appearances recapping his rescue, Johnson was invited by U.S. Representative Randy Hultgren, R-14, to attend President Obama’s State of the Union Address held on Jan. 12 in Washington.

For Johnson, 32, who had last been to Washington as a middle-schooler, the event was a once in a lifetime experience, he said. He said he was proud to be Hultgren’s guest of honor at the historical speech and to represent his fellow deputies.

In a statement regarding his decision to invite Johnson as his guest, Hultgren called the deputy “a hero and servant to our community, putting his life on the line to protect our residents.”

“Wading into icy cold water on New Year’s Day to rescue a woman trapped inside her sinking car, Deputy Johnson put his life in danger to save hers. As he told my office, these situations demonstrate what each of us can be capable of when we’re put to the ‘ultimate test.’ There’s no doubt he passed with flying colors,” Hultgren said.

The rescue took place at Stonewater Lane and Washington Street in Oswego around 1:50 a.m. when a vehicle was spotted 100 feet off the shore of a retention pond, and slowly sinking. The vehicle eventually became completely submerged.

Johnson waded into freezing water to save the driver. He broke out the women’s rear window and was able to pull her from the car to safety, Kendall Sheriff’s Deputies said.

Johnson said it felt great to be recognized for the endeavor.

“It’s a very good story to tell for law enforcement right now, and I feel privileged to be the one to represent that,” he said. 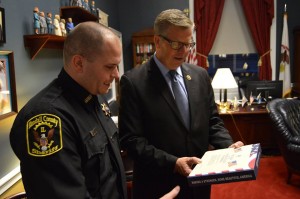 Hultgren also seemed proud to have a hero by his side during several ceremonies and get-togethers that preceded the speech, Johnson said.

“He took me around and introduced me to everyone. He was proud to tell my story and give people the tidbits of what happened. You could see he was really honored to have me as his guest,” Johnson said.

The two visited the Capital Building and Republican Majority Leader Kevin McCarthy’s office, where Johnson met other government officials and their guests.

Then, it was time for the big speech, and the reason for the trip.

“Just being there was really something else,” Johnson said. “To be there in person with people who are in such positions of power and who have a huge impact on the lives of everyone in the United States — it was really neat.”

Johnson said he’s not sure if he made any live television shots. None of his family or friends mentioned spotting him on screen. But, no screenshot could compare to the one that’s etched in his memory, he said.

And better than a screen shot is the American flag Johnson was given by Hultgren, one which had flown over the Capitol Building, he said.

“I was (in Washington) for an eighth grade trip, but I didn’t appreciate anything back then. I didn’t pay attention like I did this time,” Johnson said. “This time, i made sure I was really taking it all in.” 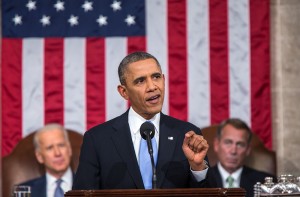 President Barack Obama delivers the State of the Union address in the House Chamber at the U.S. Capitol in Washington, D.C., Jan. 28, 2014. (Official White House Photo by Pete Souza)

To maximize his tourist experience, Johnson scheduled a late flight out on the Wednesday following Obama’s speech, and spent the day sightseeing and soaking in the history around him.

He visited the Washington Monument, WWII Memorial and the Holocaust Museum before heading back to Illinois and his wife Lydia and daughter Mia, 1,.

“It was a one in a lifetime experience,” he said. “One that will definitely last with me forever and one I’ll be proud to tell my daughter about when she gets older. I’m very honored and grateful for the experience.”

Related content: Kendall deputy to be at State of the Union

— Kendall deputy  ‘very honored’  to have State of the Union experience-