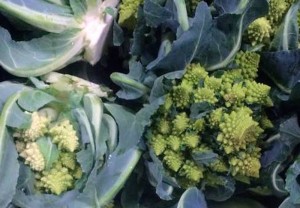 Romanesco cauliflower is a cool-season crop with conical heads of yellow-green. (Photo courtesy of University of Illinois Extension)

Would you like to try growing something new in your vegetable garden this year? “These unusual but elegant vegetables are sure to give you restaurant-quality meals throughout the summertime,” says University of Illinois Extension Horticulture Educator Kelly Allsup.

Haricot verts are long, graceful and lean beans that grow between 4 to 6 inches long. One plant of these sweet green beans will yield a half pound of produce. ‘Finaud,’ ‘Tavera’ and ‘Nickel’ are the tenderest because of their small seeds.

They are a warm-season vegetable and best planted at the time corn, tomato and eggplant are placed in the garden. They take only 50 days to start producing beans. Haricot verts grow better when compost is added to the soil and are watered regularly. At time of planting, space seeds 2 inches apart and then thin to 8 inches. In warm weather, the yield will last three to four weeks and should be picked smaller to maintain tenderness.

Succession planting is encouraged because after three weeks of producing it is best to replace the plant. At time of planting, some growers inoculate seeds with nitrogen-fixing bacteria to improve disease resistance and hardiness of the plant. Most garden centers carry this product in spring.

Romanesco cauliflower has beautiful conical heads of yellow-green that are an exact logarithmic spiral. This sweet, nutty, slightly spicy but mild vegetable produces heads 75 to 100 days after planting. ‘Veronica’ is the most common variety of this 500-year-old Italian vegetable.

As a cool-season crop, seeds should be planted indoors in 2-inch-wide liners six to eight weeks before frost. A one- to two-week period of hardening off will keep the plant vigorous. Hardening off is when you set your transplants outdoors during the day and bring them in or cover them at night. They grow best in fertile soil and when watered regularly. When planting, space them 18 to 24 inches apart when they are 4 to 6 inches tall, as they will grow 3 feet tall. 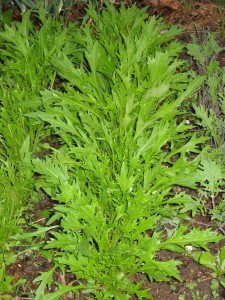 Mizuna is a mild-flavored Asian green in the cabbage family. (Photo courtesy of University of Illinois Extension)

Beware of cutworms at time of planting. Cutworms are the larvae of moths and live in soil and feed on young plants. Tilling, preventing weeds and making a collar out of cardboard, milk jugs or aluminum foil buried at least 2 inches below the soil will prevent most cutworm damage. Spreading diatomaceous earth as a barrier around plants or sunflowers on the edge of the garden as a trap crop also can be effective. A trap crop is usually favored and will lure them away from your young Romanesco seedlings.

Kohlrabi is an orb-shaped swollen stem that is promised to be sweeter and milder than cabbage. The swollen stem can be harvested six weeks after planting, when the diameter is between two and three inches. However, if harvested at 1 inch they have the mildest flavors. Globes and leaves can come in purple or white. Common white varieties are Early White Vienna, Empress Forcer, Grand Duke and Kolpak. Common purple varieties are Early Purple Vienna and Blaro.

Seeds can be started indoors and planted as early as April. If plant is direct seeded, thin seedlings to 6 inches apart. If the temperature remains below 50 degrees for more than a few days, it is best to cover them with a white frost cloth until day temperatures rise. They grow best in fertile soil and require at least 1 inch of irrigation per week. The plant grows to about 1 to 2 feet tall.

In addition to harvesting the round base to add crunch to any salad, young leaves can be harvested and cooked like other greens.

Mizuna is a mild-flavored Asian green in the cabbage family. It takes only 30 days to get a harvest of ornamental rosettes of attractive slender leaves from seed. Mizuna is more tolerant to heat and can be planted from spring to late summer. However the best flavors and most vigorous growth is exhibited when grown in cooler temperatures.

Seeds can be started about two weeks before the last frost date of May 10. They should be planted 1 inch apart and thinned to 6 inches after seeds have emerged. Mizuna grows best in moist and fertile soil. This vegetable is often available early at farmers markets because it can be seeded in the fall, overwintered with protection and starts to vigorously grow while temperatures are cool but warming up.

Many gardeners can use frost cloth, a white material specially designed to insulate plants from 20-degree temperatures while allowing in sun and moisture. This cloth can be found at nurseries and garden shops and used when temperatures drop below ideal. This extra gardening expense can allow gardeners to plant as early as late March to early April, allowing for much earlier harvests.

— Kendall gardeners should give these unusual vegetables at try —