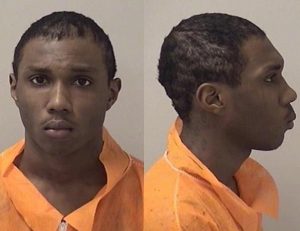 A 21-year-old Joliet man was recently convicted of shooting a young father to death inside an Aurora restaurant in 2014 during what prosecutors called a drug deal gone bad.

On Aug. 31, Dimitri Green-Hosey, 1200 block of Fairchild Avenue, was convicted of the first-degree murder and armed robbery of 20-year-old Arin Williams following a jury trial in front of Circuit Judge Donald Tegeler, Jr..

Jurors deliberated for about six hours before deciding that not only was Dimitri Green-Hosey involved in the murder of Williams, but that he personally fired the weapon that killed him.

“Drugs and guns are always a bad combination, and often a deadly combination. Mr. Green-Hosey chose to shoot someone over a small amount of drugs and now faces the likelihood of spending the rest of his life in prison,” Kane County State’s Attorney Joe McMahon said.

At the time of his death, Williams had a 1-year-old child.

During the trial, prosecutors presented evidence that included a timeline of events leading up to the final moments of Williams’ life.

According to prosecutors, Green-Hosey brothers met with Williams at the now-closed La Torta Mexican restaurant in the 800 block of North Lake Street in Aurora around 7:30 p.m. on Jan. 13. The two intended to buy an ounce of marijuana from Williams, but instead decided to rob him of the drugs, prosecutors said.

The exchange, which took place inside the restaurant’s bathroom, quickly turned deadly.

Prosecutors said at one point during the meeting, Jaquan grabbed the marijuana and began to run. Dimitri then shot Williams in the back of the head, killing him.

Following the shooting, the brothers fled the scene, dumping evidence that was later collected, tested and used against them. This included the murder weapon, which was thrown near the Fox River. The following day, police tracked the suspects to Cicero where they were taken into custody and charged.

Both brothers remain in custody. Bond was revoked upon conviction.

— Man convicted of murder in armed drug robbery in Aurora —