According to the Kendall County Sheriff’s Department, Juan Padilla, 28, 0-100 block of Briarcliff Road, was charged with vehicular hijacking, aggravated robbery, possession of a stolen vehicle and aggravated fleeing eluding, stemming from the Oct. 21 incident that occurred at a gas station at Route 25 and Boulder Hill Pass in unincorporated Montgomery. 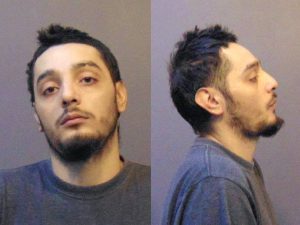 Around 8:30 p.m., a man, later identified as Padilla, allegedly walked up to a man in a Nissan SUV, pointed a gun at the man, took his keys and fled the scene in the man’s vehicle, deputies said.

Oswego Police were the first to encounter Padilla and the stolen vehicle about five minutes later at Route 34 and Osage Court where they attempted to conduct a traffic stop.

Padilla stopped the vehicle for a moment, but then drove off as officers approached him, according to Kendall deputies said.

The Kendall County Sheriff’s Office then began a pursuit of the vehicle, with Oswego police assisting, through the downtown area of Oswego, ultimately heading northbound on Route 71.

At Route 71 and Route 34, police deployed a Stop Sticks tire deflation device, which Padilla ended up running over. Two of the stolen vehicle’s tires were punctured and Padilla pulled into the nearby Speedway gas station and attempted to flee on foot.

At around 8:45 p.m., 15 minutes after the carjacking had occurred, Padilla was taken into custody and charged with fleeing and eluding police. Felony charges were later authorized.

During the investigation it was discovered Padilla also had two outstanding warrants for his arrest, according to deputies.