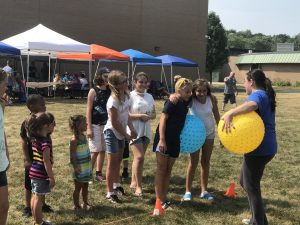 Kids get ready to play a game at the Boulder Hill community picnic held at Long Beach Elementary School on Sunday, Aug. 5. (Photo by Erika Wurst / for Chronicle Media)

Boulder Hill residents came together in big way on Sunday, Aug. 5 as they gathered at Long Beach Elementary school for the first — and what organizers hope is an annual — Boulder Hill community picnic.

People brought tables and tents for shade. There were coolers of soda, homemade pulled pork sandwiches, and a spread of side dishes that was tables long.

Every hot dog and bun, every cookie or cube of ice was donated by local businesses and residents who were eager to help sponsor the community event.

“It was crazy trying to plan all of this, but everybody stepped up in a big way,” said picnic organizer Rob Delong. “For our first year, it was an absolute great turnout.”

Delong estimates that around 150 peopled turned up to meet their neighbors and strengthen community ties.

“Everyone has come up to me and told me how much Boulder Hill needed this,” he said.

Wearing name tags and wide smiles, neighbors and families relaxed in the shade and shared stories about their ties to the community. 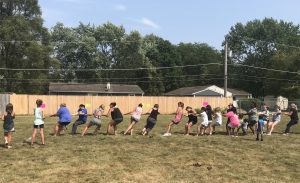 Children and adults alike participated in tug-of-war matches at the Boulder Hill community picnic on Aug. 5. The picnic was seen as a way to build community unity. (Photo by Erika Wurst / for Chronicle Media)

For Boulder Hill resident Ashlee Schneider, the event was much needed.

“Just learning your neighbor’s names is so profound,” Schneider said. “It can have a really big impact.”

The Boulder Hill community in Oswego Township, between Montgomery and Oswego, has been struggling with crime, including some gun and gang violence, earlier this year.

Some residents have stepped up to be community leaders and have expressed a need for people to look out for one another.

“We need connections so we can take care of each other’s needs,” she said. “This is amazing.” 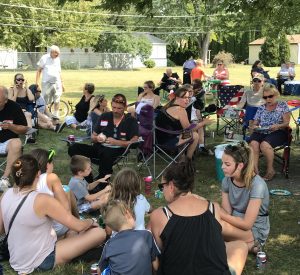 People gather in the shade as they eat a picnic lunch at the Boulder Hill picnic on Aug. 5. The event was organized to help people get out into the community and to get to know their neighbors. (Photo by Erika Wurst / for Chronicle Media)

Children played tug-of-war, followed by the adults. They tried their luck at Bozo Buckets and relay races, or frolicked around the park.

Kids who never met before were suddenly fast friends and adults who generally stay inside were out, about and ready to mingle.

Delong said he hopes the event continues to grow and become bigger and better as the years go on.

“I look forward to the future and already have plans for next year,” he said.