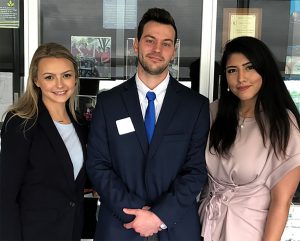 Alison Ward of Bolingbrook, Anthony Skrapits of Manhattan, Ill. and Alexandra Hurtado of Aurora won both the overall Award of Excellence and first place in the Industrial and Systems Engineering category. (Photo courtesy of Northern Illinois University)

You could say a team of NIU’s graduating engineering students did their homework—and then some.

Taking top honors in the College of Engineering and Engineering Technology’s Spring 2018 Senior Design Day, the team is expected to save Aurora Specialty Textiles Group, Inc. roughly $100,000 a year.

Their efforts went beyond simply savings, with all those involved praising the team’s professionalism.

“They were super enthusiastic, and that was contagious,” said Marcia Ayala, vice president of the Yorkville-based textile company.

Tasked with increasing the company’s production times and improving cleaning methods, the team of Industrial and Systems Engineering graduates bested 38 other teams in NIU’s capstone competition. Faculty representatives chose the winning teams from each department, while the Engineering and Technology Alumni Society chose the overall winner.

Made up of Alexandra Hurtado of Aurora, Anthony Skrapits of Manhattan, Ill., and Alison Ward of Bolingbrook, the winning Range II Changeover Optimization project won both the overall Award of Excellence and first place in the Industrial and Systems Engineering category.

In the competition, teams tasked with real-world problems from local businesses and industries present recommendations typically applied at a later date.

“They took their jobs very seriously,” he said. “They worked long hours. They were very capable and communicated with everyone in the company, from lower to higher levels.”

“I think through their efforts, we’ll get 30 to 50 percent improvement,” said John Schuster, director of operations for Aurora Specialty Textiles Group, Inc. He spoke in a video shown during the team’s final presentation.

“We got a lot of enthusiasm from every shift,” he said. “That is what I think led to the success of this project.”

The team estimates the yearly added production hours will create a savings of $80,000 to $95,000 annually.

Another $13,500 could be saved through new cleaning procedures, the team reported.

“I know from an industry standard, people aren’t going to do anything unless it’s practical,” team member Hurtado said. “You can try to explain theories, but it has to be super simple. You have to show actual savings. We crunched the numbers.”

The team identified tasks that could be done before, during and after changeover times to cut down on those times and suggested the use of automatic spinning brushes with longer handles for cleaning instead of the abrasive pads employees were using. The new cleaning tools not only made the task quicker, but prevented employees from having to “crouch in these weird positions for a long time,” Hurtado said.

“Sometimes, people are so deep into the process, it’s difficult for them to step back and see what would help,” she said. “They need fresh eyes.”