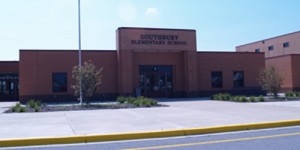 District 308’s Southbury Elementary School in Oswego has partnered with a sister school in Ghana on a literacy project. (Photo from Schoo District 308)

District 308’s Southbury Elementary School is working to spread the love of literacy to children in Africa while instilling a passion for service learning in its students.

Since March 2015, Southbury has partnered with sister school Katakyiase in Ghana by donating school supplies and money for a lunch program. Since then, however, Southbury’s Character Club has increased the school’s efforts to help the students of Katakyiase by raising enough money to build a library.

“Our hope is to raise $15,000. We believe that will be sufficient to build a library and some bookshelves, and if we raise more, we will buy books,” said Southbury Elementary Principal Lindsay Allen. “All children need access to quality literature to move forward and be successful in life. If we can help the students of Katakyiase with that, I cannot think of anything else that is more rewarding.”

Allen will be in Ghana from Dec.20 to Dec. 31 to help locate a building site for the library.

“I will be scoping out the dilapidated buildings to see if any of them can be fixed up to house the new library, or whether there is a better site to build a new library from scratch,” she said. “I am also going to do professional development, and then another group will go to Ghana in March to build the library.”

Southbury is also in the process of shipping more than 200 boxes of school supplies, including District 308’s old Houghton Mifflin English series textbooks to Katakyiase School.

“The district was elated to donate its old textbooks to help the students of Katakyiase thrive in their English studies,” said District 308 Superintendent of Schools Mathew Wendt. “And I could not be any more proud of the students at Southbury, who are sharing their love of literacy and service with students halfway around the world who are less fortunate.”

To raise money during the first three weeks of December, each Southbury classroom teacher will have a jug where students can donate coins to its Change for Change effort to help build a library at Katakyiase School. A collection jug will also be located in the principal’s office. Starting in December, Character Club will collect and count the donations.

The class that brings in the most money will earn a pajama party and receive a visit from a special guest reader. Anyone wishing to make a donation by check can make it out to Southbury Elementary with Ghana in the memo line.

Southbury and Allen, who is working on her doctorate in literacy at Judson University, Elgin, Ill., first became acquainted with Katakyiase School last spring. In March 2015, Allen co-led a professional development effort to Ghana that consisted of volunteers from Judson University and Two Pennies Ministry.

“Our mission was to educate teachers about the importance of reading out loud everyday to students,” said Allen. “We brought over boxes and boxes of children’s books. The kids were very excited to see the books and materials, but they were even more curious about the people who traveled from America to share with them.”

Katakyiase School is located in an impoverished area of rural Ghana, where 15 people might share a one-room home, and where tables of students are lucky to have one book to share. Some groups of students have no books.

“We take so many things for granted here. We have plenty of books, papers, pencils, and other school supplies,” Allen said. “At Katakyiase, the kindergarten classroom had 45 students—age 3 to 5—and there were not enough chairs or tables.”

Last year, Southbury raised $1,800 during Jean’s Week, which helped start a lunch program at Katakyiase School. The donation was large enough to sustain the lunch program for a year

“We are very excited to continue building our relationship and spreading the love of literacy to our sister school,” said Allen. “Our Character Club feels very invested in this school and will begin pen paling with students of Katakyiase after the first of the year. We can learn from them, and they can learn from us.”

–Oswego school partners with school in Ghana on literacy–