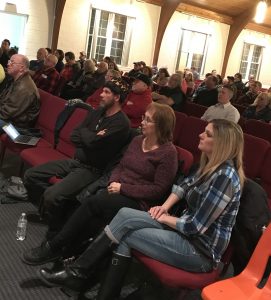 More than 80 Boulder Hill residents got schooled on all things gang-related last week during a Neighborhood Watch meeting focused on gang prevention in the area.

“The style of dress has changed a lot lately,” said Sgt. Behr Pfizenmaier. “Just because someone wears a flat-brim hat or a jersey doesn’t make them a gang member.”

Instead, Pfizenmaier and Inspector Bob Lechowicz walked residents through what they should be looking for as far as dress, tattoos and local graffiti are concerned.

Gang colors and symbols were discussed, along with the historical background of prevalent gangs in the area.

The Four Corner Hustlers used to be a major gang in the Kendall County area, but that has recently changed, Pfizenmaier said.

“We spent a lot of time targeting this gang,” Lechowicz said. “We’ve driven their whole system out of Kendall County, which is good for us and our community. We go out and actively try to punish these guys and let them know that we know what they are doing. It’s a war on crime and we can’t do it alone. We need everyone’s help so we can be a success.”

The fight against gang admission for youth can begin as early as middle school, the officers told the crowd. They’ve heard about gang members starting as young as 9 years old. In fact, between 80 and 90 percent of Kendall County gang members joined their gangs at 12 or 13 years old. 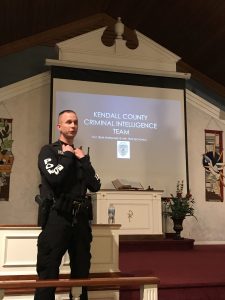 Forty percent of the county’s gang members are currently under the age of 18, Pfizenmaier said

“That’s absolutely ridiculous to me,” he lamented.

Gangs are using social media to recruit members who might be lured into the gang life because of a variety of factors, Pfizenmaier said. Teens seeking a community to which they can belong, status, power, and protection are often drawn into gang culture.

Once in a gang, members are encouraged to live a consistent life of crime, committing home invasions, robberies, shootings, car theft, weapons violations and the like.

The officers stressed that these are things residents can help combat. Keeping house lights on at night, locking car doors and remaining vigilant about what’s going on around them.

“Lighting is our best friend,” Pfizenmaier said. Free LED lightbulbs were given to residents for free to place outside their homes.

He encouraged parents to monitor their children’s social media accounts, pay attention to tattoos, drawing and clothing choices, and to say something if you see something.

“Observe, listen and report,” Pfizenmaier said. “Now that you have all of these tools we fed you, you’ll start picking up on stuff and it will make our lives easier.”