Author Kristina Springer, who has been publishing young adult books for more than 10 years, has been a fixture at the Oswego Literary Festival.

The state is the birthplace of legendary authors like Ernest Hemingway, Saul Bellow, Ray Bradbury and Nelson Algren  as well as home to current novelists like Sara Paretsky and Scott Turow.

Across the state local authors are hammering at their keyboards hoping to be the next local author to make it to the New York Times’ best seller list as has Elizabeth Berg of Naperville and Mary Kubica of Plainfield, who have both had novels on the list.

Most often, local authors are likely to be self-published or represented by independent publishing companies, according to Gloria Drake with the Oswego Public Library.

“Both self-publishing and indie publishing are rapidly growing industries,” she added.

At a recent Oswego Literary Festival, more than 45 local authors were in attendance to meet the public, network with one another as well as market their writing.

Even one of Oswego Library’s own staff members was on hand promoting a book she recently illustrated.

Ruth Craver, a long-time employee of the Oswego Public Library, recently illustrated her first book— “N is for Noah.”

Written by Dr. Kris Condi and published through Archway Publishing, the self-publishing arm of Simon & Schuster, “N is for Noah “includes twenty-six short stories which lead young readers through the alphabet and demonstrate children engaging in activities from being physically active to portraying kindness. 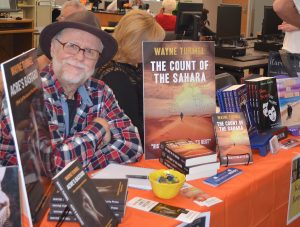 Lisle’s Wayne Turmel has published several nonfiction works and in 2015 his first novel, “The Count of the Sahara,” was published by The Book Folks, a small London-based publishing house.

Craver is a former teacher currently works as a library assistant specializing in children’s books at Oswego Public Library.

She’s not the first Oswego librarian to be published. Fellow employee Shanna Simpson has been published as a story contributor in “Taproot” — a self-published book by the Plainfield-based Tri-County Writers’ Guild..

Author Kristina Springer, who has been publishing young adult books for more than 10 years, attends the Oswego event each year

The Naperville resident and mother of four has said she gets her ideas for books from a variety of places including her own childhood.

Springer’s book, “My Fake Boyfriend is Better Than Yours” came from her own experience as a young teen.

Springer created a fake boyfriend which a friend later claimed to have also dated.

In 2006, Springer wrote her first novel, “The Espressologist,” and found a literary agent.

Four publishers bid on the book including  Farrar, Straus, and Giroux where Springer signed a two-year book deal.

Her book, a tale of a 17-year-old barista who plays matchmaker based on her customers’ coffee orders, has been translated into Japanese, Indonesian, Korean, German, Russian, and Czech.

“The Espressologist” was a 2010 Society of School Librarians International Honor Book and 2014 Illinois Reads Book.  The film rights to the book have been purchased by Michael Eisner’s Vuguru. 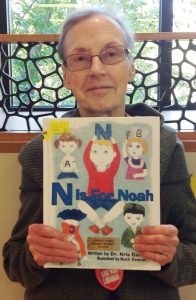 Ruth Craver is a long-time employee of the Oswego Public Library and recently illustrated her first book — N is for Noah.

“If your goal is to publish a book with a big New York City publisher, the first step is to find a literary agent,” Springer said. “Write a great query letter to introduce your book (Google for more information) and then search on agentquery.com for an agent who handles your genre of writing. You may have to query a lot of agents to find the right one for you, but stick with it.”

Lisle’s Wayne Turmel has published several nonfiction works and in 2015 his first novel, “The Count of the Sahara,” was published by The Book Folks,  a small London-based publishing house predominantly interested in crime fiction, thrillers and mysteries.

“They are a small press, publishing strictly through Amazon, and 75% or more of their revenue is from Kindle,” he shared.

“It’s available not only at Amazon, but also because I’ve managed the distribution, it’s available online and in some Barnes and Noble stores, as well as independents like Centuries and Sleuths in River Forest,” he added.

Also an author of nonfiction books, Turmel said his books have reached the market with “big publishers,” smaller established publishers, and some self-published.

“It all has its charms,” Turmel said.

“My two best-selling books (“Meet Like You Mean It,” and “6 Weeks to a Great Webinar”) were self-published through Amazon/CreateSpace and I’m very happy. Others, I’ve been grateful for the help a publisher can give. The book landscape is the wild west,” he added.