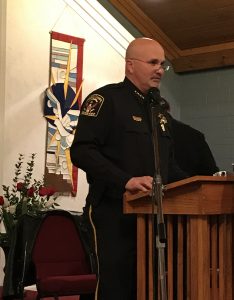 Kendall County Sheriff Dwight Baird addresses Boulder Hill residents’ concerns about a recent increase in crime at a community meeting at the Church of The Brethren on Jan. 31. (Photo by Erika Wurst / for Chronicle Media)

Boulder Hill residents came out in the masses last week to take back their neighborhood and learn from law enforcement official about the uptick of recent crime occurring on their streets.

It was a standing-room only crowd of more than 250 people on Jan. 31 at the Church of The Brethren on Boulder Hill Pass where the Kendall County Sheriff’s Office hosted a community meeting addressing a recent series of shootings that have left residents shaken.

“I’m so angered by this, I don’t even know where to begin,” a mother living near the scene of a recent shooting lamented. Her daughter was out walking the dog just minutes before gunfire broke out on her street.

“I don’t think I should have to keep my kid inside,” she said angrily to an audience which included County Board members, the school district Superintendent, local government officials and hundreds of concerned neighbors.

Sheriff Dwight Baird used the platform to state the facts surrounding several recent shootings, which left one man dead. He said at least three of the incidents appear to be related and gang members have been the targets.

“Based on our investigation, they are gang related,” Baird said. “Gang members shooting at gang members.”

Understanding this trend, the Sheriff’s Department in 2015 created the Kendall County Criminal Intelligence Team to combat gang, drugs and crime. The members are full-time officers from the Sheriff’s Department, as well as the Oswego and Yorkville Police Departments. As a result of their investigations, the team has concluded that there are 27 known gang members living in Boulder Hill, representing more than a half-dozen different gangs.

“Our goal is to try to use everything in our power in order to make it uncomfortable for (gang members) to live here and so they’ll leave,” Baird said. The department’s 43 patrol deputies are working hard to make that happen.

Increased patrols throughout Boulder Hill are happening, he said, and often times in a covert fashion.

“You may not see us all the time, but we are out there in your neighborhoods,” Baird said. He also pointed to how quickly deputies arrived on the site of the January shootings. Twenty-six officers were on scene of the Jan. 26 Amesbury shooting within minutes, and nearby Long Beach Elementary School, which was in session at the time, was quickly put on lock down. 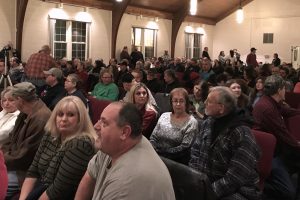 More than 250 people came out to the Church of The Brethren on Boulder Hill Pass for a community safety meeting led by the Kendall County Sheriff’s Office on Jan. 31. (Photo by Erika Wurst / for Chronicle Media)

“I mention this as an example of how police and schools work together,” Baird said.

School District 308 has its own security plans and scenario-based training, and conducts drills with the police department to help refine their responses.

Continued training and having current technology and surveillance systems are musts, he said.

The department is also working with other local law enforcement agencies and is increasing its participation in multi-jurisdictional task forces.

Peters stressed, however, that deputies also need the help of residents, who are the true eyes and ears of their communities.

“Remember, if you see something suspicious, give us a call,” Baird said. “I want to thank the members of the community for working together with us to solve these cases. Your information is extremely valuable.”

Two Aurora men were arrested and three guns were seized in connection with the Jan. 26 Boulder Hill shooting. Baird said this was a result of police work and resident tips working in tandem.

“Your safety, the safety of your family and community, is our number one concern,” Baird said.

Residents banded together, shoulder to shoulder as they spilled out into the church’s hallways to listen to the sheriff speak. They discussed leaving porch lights on, getting surveillance cameras on their homes, and coming together as a community to take back their streets.

A Facebook group has been started for community members to share concerns, and there’s a good chance an upcoming Neighborhood Watch meeting will be widely attended.

The meetings, which take place at the Church of the Brethren, 155 Boulder Hill Pass, Montgomery, on the second Wednesday of the month, generally have an attendance of less than 10 people, Baird said. He’s hoping the most recent community meeting will help drum-up participation.

How to get involved

The next Neighborhood Watch meeting for Boulder Hill residents will be at 7 p.m. on Feb. 14 at the Church of the Brethren, 155 Boulder Hill Pass, Montgomery.