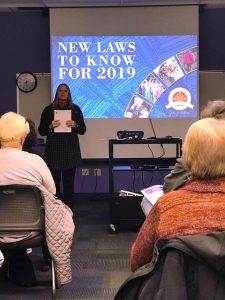 State Rep. Stephanie Kifowit explains one of the new Illinois laws for this year during an informational meeting at the Eola Road Aurora Library on Jan. 17. (Photo by Erika Wurst/for Chronicle Media)

Illinois lawmakers passed more than 250 bills in 2018 that become law this year, and it’s a lot of information to consume.

State Rep. Stephanie Kifowit D-Aurora sat down with her constituents at the Eola Road Aurora Library Jan. 17 to discuss what the new legislation means to Illinois residents, and to highlight some of the most pertinent changes that will affect their everyday lives.

Kifowit was joined by lobbyist Brianna Lantz, who warned residents not to get overwhelmed at the idea of having hundreds of new laws to abide by.

“People see that 250 number and think, “We don’t need that many laws in Illinois.’,” Lantz said. “But, one thing legislators are is precise.”

Many of the new laws are old laws that have been tweaked in minor ways for clarity. By changing even one or two words, a new law is born.

However, out of the more than 250 new laws, some are indeed fresh and worth noting. Kifowit took time to discuss the top 10 passed bills that she feels people should be aware of.

“New moms have enough to deal with already,” Kifowit said of the law.

“This is a good law in regards to domestic violence victims, and this is also a good public safety law,” Kifowit said.

All of the bills can be accessed on the Illinois General Assembly website at www.ilga.gov.