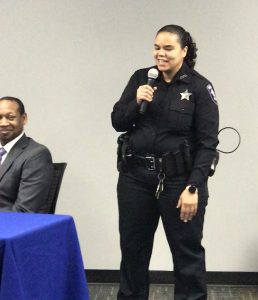 Aurora Police Officer Starr Perila greets the group and shares with educators and leaders exactly how the idea for the Jan. 15 conversation came about. (Photo by Erika Wurst /for Chronicle Media)

Look at this,”,  said a wide-eyed observer, gesturing to the crowded room of Aurora high schoolers she sat amongst on Jan. 15.

Some wearing ties, some wearing T-shirts, but each wearing a chip they wanted to get off their shoulders.

At the room’s helm sat their city’s VIPs.

Aurora Police Chief Kristen Ziman, Mayor Richard Irvin, and their schools’ superintendents looked back at them with eager eyes and open ears.

“I wish I had this when I was growing up,” said that 25-year-old 2003 East Aurora graduate. “We didn’t have people asking us what they could do differently.”

That was the point of the two-hour conversation between the teens and the hand-picked adults who they believed could directly help them. Adults who could help them curb violence, get kids engaged in school again, encourage teachers and officers to meet students eye to eye.

The idea for the sit-down began organically. Aurora Police Officer Starr Pirela was sitting down as she usually does with a group of East Aurora students ready to discuss issues they might be facing. The intention of this particular gathering was to discuss dating.

“That just wasn’t on my heart that morning,” Pirela said. Her mind wasn’t on hooking-up, but on two recent shootings that left these students’ peers dead.

She wanted to know what were the problems Aurora youth were facing and she wanted to hear it from them directly.

And that’s how the conversation began.

“I wasn’t expecting them to step up that far,” Pirela said of the teens’ motivation. “I just thought we were having a good conversation, but as always, they went big with it.” 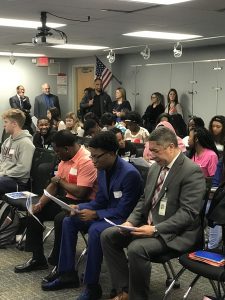 That is when then led to Aurora students from different social classes, different living environments, and varying perspectives on life were bused in and brought together at West Aurora High School Jan. 15 for a chance to speak their minds. What they said, however, wasn’t always what their elders expected to hear.

Several students did propose doing away with Saturday school days and detention — but just in the traditional sense. Instead of simply sitting in a room, they suggested the time be used for tutoring, counseling, or doing community service. Offer help, not punishment, they implored.

“(Teachers) don’t always try to understand what’s going on at home,” Beja Johnson, an East Aurora senior, said. “They’re quick to brush things off and send you to the Dean’s office.”

She encouraged teachers to build relationships with their students and understand their plights, because none of their home lives are the same. There’s the over strict parent whose child goes wild when let out of the house, and the “best friend” parent trying to live the life of a teen.

“A big factor (contributing to today’s violence) would be parenting,” Johnson said. “Some youth right now have no type of support from their parents. They want to be our age so bad and they go out and do the stuff we do and try to be their child’s friend. We need more support.”

That goes for school, as well as home, she said.

“This generation is getting so much worse…I feel schools should not be prisons, but have a little more structure. Be on kids’ butts a little more,” Johnson said.

“What you don’t often hear kids your age say is that you want boundaries,” Ziman said. Which is exactly what many students were in a round-about way pleading for. 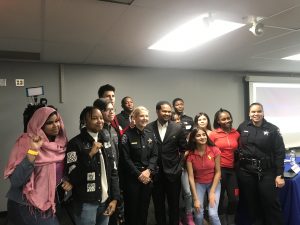 West Aurora students take a moment to pose with Mayor Richard Irvin, Police Chief Kristen Ziman and Officer Pirela at the conclusion of the event. (Photo by Erika Wurst /for Chronicle Media)

“I feel like a big problem with kids these days is they’re extremely desensitized to everything going on around them. We see all of these violent things going down and we’re used to it,” one student said. “If someone pulls a vape out at lunch and gives it to a friend, no one would react to it. It’s the norm…people used to be afraid of guns. We need to get kids to understand how bad things really are.”

As hand after hand was raised, and voice after voice was heard and stories were told and wishes were spoken,  Ziman was left hearing one word.

“I hear the word ‘care’ all over this room,” Ziman told the teens. “Just care about us. I want to remind you, there are so many people who care.”

Officer Pirela might be their biggest fan, though. Her ears are always open and her mind is always ready to accept change.

“Feel free to reach out,” she said before the conversation’s end. “If you see me, stop me. I want to know how you’re doing. I’m interested. I appreciate you guys opening up and starting this movement. I know one day, you’ll be in this uniform.”

And if they’re lucky enough, they’ll have the opportunity to stand beside a group of teens and help their generation advocate for change.