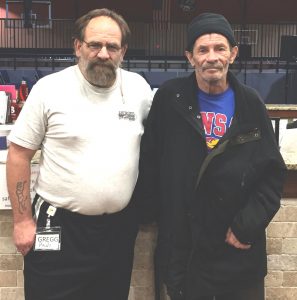 Kenny Wyzykowski grew up near Wrigley Field. As a young man, Kenny landed a job delivering bundles of the Chicago Daily News on the North Side.

“I got to keep most of the money in the vending machines,” he recalled. “So, I did pretty good.”

After a decade of delivering newspapers, Wyzykowski went onto a 35-year carnival career, working for Windy City Amusements throughout Chicagoland and most of Illinois.

But the “carny” lifestyle took a toll on his body and he suffered a stroke in 2016. His finances were depleted and he could not afford a place to live.

That’s when Wyzykowski found out that Kendall County PADS had helping hands. For nearly three years, he was welcomed into the seven shelters that the homeless support group operates each night of the week from mid-October through mid-April.

“They were wonderful to me,” he said. “I got banned for four days, but I apologized, and they let me come back.”

Wyzykowski was one of the more-fortunate PADS guests because he has an automobile, which allowed him to drive every evening to one of the shelter sites, rather than use the public transit vehicle that the nonprofit organization contracts.

However, during the warmer six months of the calendar, when the temporary housing is not available, he was forced to live in motels. “All my money went for that.”

Meanwhile, his name was placed on a waiting list for subsidized housing through the Kendall County Health Department. And finally, late last year, the health department was able to secure him a one-bedroom apartment in Amboy, about 40 miles westward in Lee County.

Kendall County PADS’ mission for Wyzykowski was accomplished. But when Executive Director Anne Engelhardt learned that he had no furnishings for his new apartment, she decided to go the extra mile with him.

“I told him that I’d reach out to volunteers and other friends of the homeless,” Engelhardt said.

One of those friends is Carmen Solis, a volunteer at the PADS shelter at Church of the Good Shepherd in Oswego.

Solis, a Plainfield resident and client acquisition consultant for MetLife, thus became the manager of the project. She created a spreadsheet of needs and recruited seven team members to help.

Then they prepared a meal, rented a U-Haul truck, and set out on an hour-long caravan of care to Amboy. When they arrived, Wyzykowski was overwhelmed by the outpouring of generosity from the PADS volunteers.

“I want to thank them for all that they did for me,” he said. “I was blessed.”

The volunteers were blessed, too. Solis said, “It was very rewarding for me. I don’t like the way things are, so this was one of the ways that I try to bring about change.”

For the past nine years, overnight guests of Kendall County PADS have been receiving a hot meal, a safe place to sleep, breakfast, and a packed lunch to go. They also receive assistance with employment, social services, and housing referrals.