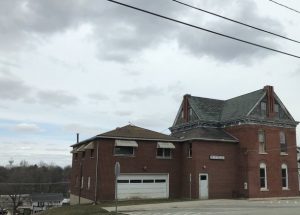 The old Kendall County Jail in downtown Yorkville, 111 W. Madison St., was slated for demolition but the City Council has voted to save the building, at least for now. (Photo courtesy of Save the Jail)

The fight to save the old Kendall County jail will continue after Yorkville aldermen unanimously agreed to put off demolition of the historic, yet deteriorating, building.

Citizen advocates who have banded together to preserve the jail were given an additional three months to come back to the council with a formal proposal citing future uses for the building. The decision was due in part to overwhelming support from the community.

Residents packed the Yorkville City Council meeting on July 24 with pleas for restoration instead of demolition.

Lisa Wolancevich, who is spearheading the preservation efforts, said she’s already received more than $67,000 in pledges from residents who want to see the old building come back to life.

“We have more people who want to come forward, but they want to see the city support this,” she pleaded.

The building has already been recognized by the state as an important historic building, and is on its way to the National Registry.

Wolancevich and others spent time talking about how important it is to preserve history in their growing city, and perhaps no one understands this better than Robyn Sutcliff, who owns Foxy’s Ice Cream in downtown Yorkville.

Foxy’s is also a historic building and once served as the city police station.

“Before I bought (the building), people wanted to tear it down. But I saw something more in it,” Sutcliff said. The building, which Sutcliff personally restored, is now a community gathering spot and ice cream haven.

“I love the fact that it’s an old building,” she said. “It’s important and nostalgic and you don’t see it every day.” 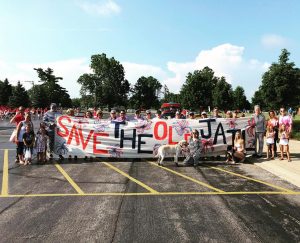 Members of the Save the Jail organization raised awareness of their campaign by marching in the city of Yorkville’s Fourth of July parade. (Photo courtesy of Save the Jail)

The old Kendall County Jail is just one of two buildings of its kind in the entire United States that is available to view. It housed prisoners and the sheriff’s family for decades.

“It is a gem to this city,” Wolancevich said, continuing to plead her case for restoration. She asked that the city use the money slated for demolition to stabilize the deteriorating building while the group continues to secure additional funding.

While many aldermen were on board with the mission, Joel Frieders wasn’t entirely sure.

“I think there are better ways for the city to spend money,” Frieders said. “I’m looking at this from a realistic perspective.”

By the end of the meeting, however, it seems advocates had swayed Frieders enough to allow them an extension to solidify their plans and goals for the old jail.

Aldermen unanimously agreed to put off demolition and allow advocates three additional months to put together a plan and proposal for the building’s use.

“Failure is not an option,” Wolancevich said. “I will save this building.”