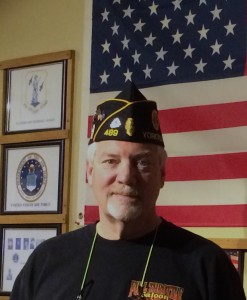 Tim Conrardy has been commander of American Legion Post 489 for five years. He has been a member for more than 20 years.
credit: Photo by Judy Harvey

It is just before 11 a.m. and the chairs inside the simple, diner-like room are beginning to fill up as the regulars walk through the door.

“Morning, Stan,” the woman behind the counter says to one.

Others exchange greetings and the room starts to buzz with conversation.

Stan and the others are there for the daily lunch special prepared and served up by Sue and a few other volunteers at American Legion Post 489. Lunch is served daily from 11 a.m. to 2 p.m. Monday through Friday here and it is just one of many often unheralded but important community services the Yorkville mainstay provides.

The post, located on Route 34, has been around for more than 80 years and today has more than 1,200 members, including 500 veterans, and hundreds of auxiliary, Legion Riders (the motorcycle wing) and Sons of American Legion members, who are relatives of full members.

At the helm of American Legion Post 489 is Tim Conrardy, a 20-plus year member who has served as commander for the past five years. Conrardy served during the final years of Vietnam War on a carrier in the Middle East. While never seeing combat, Conrardy says he feels an obligation to help his fellow veterans from not only Vietnam, but all other wars before and since.

“The Legion’s mission is we want to make sure what happened at the end of the Vietnam War doesn’t happen to veterans again,” he said, referring to the lack of services and support given to many returning from that long and politically divisive conflict.

“This place is a sanctuary to share,” Conrardy said, while sitting in the front room that serves as a dining area and bar at the post. “Anyone is welcome and our door is open. They can get help.”

That help comes in varied forms, from fundraisers to helping veterans get connected with the right services and with the Veterans Assistance Commission of Kendall County (http://www.co.kendall.il.us/veteransassistance/). The VAC can then get the veterans hooked up with agencies that can assist them with specific needs.

One of the those veterans in need was Kyle Moser, a Marine from Oswego who lost both of his legs and part of his right hand in Afghanistan in November 2011 by an improvised explosive device or IED. He was in recovery at Walter Reed Medical Center in Maryland, and the post decided to hold a big fundraiser for Moser. “He’s just a great kid. He really is,” said Kelly Conrardy, Tim’s wife and manager of Post 489.

The post is able to help other wounded veterans like Moser through his own program that keeps the funds and assistance “close to home” in the Kendall County region, Conrardy said.

One way they support the program is through a large annual fundraiser, described as a USO type of show involving performances from local and national talent. This year’s show will be Oct. 15 in Sandwich.

The Legion Riders motorcycles help expand the post’s reach beyond Yorkville. “They take our message on the road. They allow us to expand our tentacles beyond our city,” Conrardy said.

The Legion Riders will be there at the homes of veterans as they arrive home for the first time for support. The group works with the Kendall Food Pantry and helps with Veterans’ Affairs work, he said. On May 23, the Riders will travel to the Oakwood Cemetery near Ottawa and The Middle East Conflicts Wall Memorial in Marseilles to place American flags or “post colors” at graves and memorials.

When Conrardy assumed the commander rank at Post 489, he said the post needed to move forward in expanding ways to not only raise funds but to get more awareness for the Legion’s mission.

So, the post looks for more ways to get involved in the community beyond veteran’s issues. One favored project is the Community Safety Net project, a national “safety awareness and education initiative that creates a network of concerned individuals who want to protect children and help save lives,” according to the organization’s web site. The group produces books and materials that over a wide variety of topics including drug awareness and Post 489 gets a sponsorship in books to distribute locally.

Another major initiative for American Legion posts across the country is youth sports. For decades, posts have been sponsoring baseball, softball and football teams in their communities.

Post 489 has gone so far as to invest in its own ball fields working in tandem with the Yorkville Youth Baseball and Softball Association.

Two years ago, it was able to invest $150,000 into the existing fields on its property on Route 34 for baseball and softball games, as well as build a new T-ball field. The post opened a concession stand at the back of the building to serve up refreshments and food during the games.

“Everyone wants to play here,” Conrardy said with pride as he walks around fields on a recent bright, May morning. “This place (the grounds) fills up when we have games here. Parents, grandparents, whole families are here. There is no better place to be in the summer,” he said.

The post got help with donations from businesses in the area to help renovate the fields, including lights and a public address system, as well as a deck for a picnic area. The latter was a gift from Home Depot, which also renovated the post’s banquet hall at no expense.

A brick walk around the main ball field also serves as an ongoing fundraiser as residents and organizations can purchase memorial bricks that can help put money back into the investment,

In addition to all of its community work, Post 489 was honored with the 2013 Community Impact Award from the Yorkville Chamber of Commerce.

All of this success is realized through thousands of volunteer hours on the part of Legion members. Continuing that level of involvement requires generations passing along their commitment to the next, a challenge all service organizations face and the Legion is no exception.

The young service men and women when they get out after their tours in their early or mid-20s focus on getting their lives going, whether that is through marriage and raising a family or going finding work or a higher education. Conrardy said.

Once they become empty nesters, he said, veterans begin getting involved in the Legion and other veterans groups. “That has been the case since (the American Legion) started,” he said.

Kelly and her husband hope to attract more women veterans into the Legion as well now that more are serving in combat roles. The auxiliary, of whom Kelly is a member, plays its own key role in the Legion’s success.

Post 489 has adapted and changed to the times, dropping the traditional Friday fish fry because it became a losing operation. “It’s not easy as a group of volunteers to compete with other (for profit) organizations,” he said,

Instead, the post keeps looking for new and different ways to keep funds coming in while reaching a broader and younger audience.

The Conrardys are optimistic because they see there will always be a need for the role Post 489 plays in the Yorkville area.

“The more you help, the more people want your help. But any funds that come into the Legion goes back out to the community,” Conrardy said.