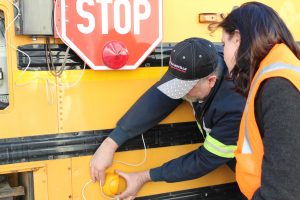 Lisa Banovetz, Y115 director of business services, watches as a Septran employee installs a camera on a stop arm of a bus. Beginning this week, the district will have 10 buses equipped with the cameras. (Photo courtesy of Yorkville School D115)

In an effort to curb infractions and improve student safety, Yorkville School District 115 has begun the process of adding cameras on the stop arms of several busses in its fleet.

Y115 Director of Business Services Lisa Banovetz said the move is a result of an increase in reports from bus drivers and community members who witness drivers failing to stop for buses.

“A little bit of concern came about last year in reference to stop arm violations, but this year, they really seem to have increased,” Banovetz said.

The cameras, which cost $324.90, will be installed on 10 busses, and will work in tandem with the buses’ current camera systems. Septran, the district’s bus provider, will install the first 10 cameras for free.

Banovetz said the 10 busses chosen will travel routes that seem to be the highest risk for violators. This will ease the burden of bus drivers and resident drivers who often try, but struggle, to get plate numbers of offending vehicles. Even then, it’s hard to prove in court who was actually driving the car.

The camera footage will allow police and prosecutors to gather information they need to prove their case. Banovetz said the Kendall County State’s Attorney’s Office is on board with the plan and willing to prosecute violators caught on camera.

“We not only want to prosecute, but we also want to educate,” said Y115 Communications Director Kristine Liptrot. “We’ve been doing a lot on social media and in newsletters to educate people who might not know the rules of bus safety.”

Banovetz will update the District 115 school board monthly as to how the technology is working, the number of violations recorded, and the number of drivers that were prosecuted.

And, while there will be 10 buses up and running with stop arm cameras soon, it might be quite some time before the district’s entire fleet is equipped.

Liptrot noted that the bus vendor contract with Septran is up in two years, and although the district will own the stop arm cameras, it would have to pay for re-installation should a new vendor be chosen. That endeavor could get costly.

However, there are some alternatives, Liptrot said. With a recent national push surrounding bus safety, Liptrot said buses may end up being required to be equipped with cameras.

Even if they aren’t required by law, stop arm cameras can be something the district itself requires of its vendor.

“The board of education is extremely passionate about ensuring the safety of the students,” Liptrot said. “The installation of these cameras is helping keep them safe.”

Cries for increased school bus safety intensified nationwide after three school children were killed in Indiana in October when a driver went around a stopped school bus and struck them as they were getting aboard their bus.  The stop arm was extended on the bus.