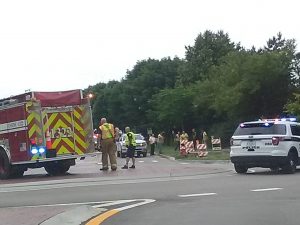 When Gurnee formally opened a mini-roundabout at the intersection of Dada Drive and Almond Road August 2018 it was done with the intention of smoothing out traffic back-ups between Grand Avenue and Washington Street that took in vehicles from the Woodland School District, the Bittersweet Golf Club, and the proximal residential neighborhoods. Although sight lines are not blocked, and the top is considered “traversable,” 12 accidents have occurred there, and raised safety awareness issues.

Despite the flow of traffic requiring a right turn into a circular pattern, and yielding to traffic within the circle, FOIA records compiled by the Gurnee Police Department noted that since Oct. 4, eight accidents have taken place without injury and three collisions had sustained injury. There was also one hit-and-run mishap recorded.

The most recent accident incurring injuries took place June 28, when cars knocked down a light standard and fireplug. Vehicle traffic was blocked as emergency responders, a fire engine, and tow truck worked the scene.

“Normally, on an emergency call of this consequence and our response to those type of accidents, we send an engine, an ambulance, and the shift commander also goes on-scene to assess the situation and monitor for additional needs,” said Lt. Keith Graham, of the Gurnee Fire Department.

Days later, a public works crew was installing new foundation kits for both the fireplug and light standard, which are equipped to be sheared off in the event of a hard collision. Repair work on the standard and landscaping continue through this month.

The mini-roundabout differs from a traditional larger roundabout in the space required for its installation, making less of a footprint and being traversable for larger vehicles such as semi tractor-trailer trucks and buses.

The 30 mph speed limit through the largely residential area has also proven problematic for village officials. Concerning the potential for accidents, neighborhood resident Annette Harrold said, “They just keep going through the circle without slowing down, and no one stops to look what they’re doing. They don’t yield to other drivers, and it’s very fast. You can watch them.”

As a result, the village is taking steps to raise safety awareness at the roundabout through additional pavement signage, and monitoring traffic by the public safety department. Listed as an agenda item for its May 6 meeting, the Village Board approved a contract not to exceed $50,000 with Elgin-based Precision Pavement Markings, Inc. for street striping work within Gurnee boundaries. The approval came on a recommendation from the village’s Engineering Division.

“The amount was set through the Lake County Municipal League Cooperative Purchasing Program at 2018 pricing guidelines,” said Village Manager Jack Linehan. “The markings will take place this fall, as part of the pavement program.

“There is the Tri-State Parkway and different upgrade areas where they will put median strips, and walkway areas, after the construction has been completed. At the roundabout, they’re putting a triangle-shaped bar at the entry points directly on the pavement to further indicate ‘yield’ for oncoming traffic,” he said.

A traditional roundabout is raised in the center, often filled with perennial flowers or pedestrian amenities, and the sight lines of oncoming traffic hidden from view. The purpose of a roundabout is to maintain a continuous flow of traffic that moves to the right in a circle, with exits at the various street points. Drivers approaching the circle must yield to traffic already making the circuit.

Part of an overall $11.7 million capital improvement, the mini-roundabout cost was nearly $1.2 million specifically as a means of relieving traffic congestion. “We kept the mini-roundabout design with a traversable center, so the larger vehicles could go over the top and not get stuck,” Linehan said.

He also noted the initiative began in reviewing the best options for the intersection. A study showed that a traffic signal warrant did not meet the outlined threshold numbers, although that same study identified that a significant increase in traffic there would unfold during the next 30 years. The Federal Highway Authority eventually concurred that the mini-roundabout design was a best case scenario.

“The costs to construct a full-on roundabout would not have outweighed the benefits,” Linehan said. “There is the visibility factor, and a snow plow truck would have difficulty.”

The village wanted to address the intersection issues simultaneously with an Almond Road resurfacing project last summer. When coupled with the “homestretch” on the Illinois Department of Transportation’s Grand Avenue resurfacing and widening project, Linehan said, “Traffic flow through the village will be greatly improved.”