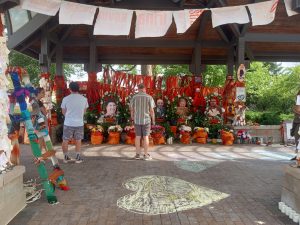 Visitors pay their respects at a street side memorial on Central Avenue honoring the seven victims of the Highland Park shootings.

The Lake County Grand Jury on Wednesday, July 27 returned indictments on a total of 117 criminal counts against Robert Crimo III, the alleged shooter at the Highland Park Fourth of July tragedy.

The action included the seven initial charges of first-degree murder for each victim killed in the attack, and now encompasses those who were injured.

The office of Lake County state’s attorney Eric Rinehart announced the indictments. He also fulfilled a promise made on July 5 to seek the additional criminal counts.

Crimo III is currently charged with 21 counts of first-degree murder, three counts for each deceased victim, according to a released statement. He is also charged with 48 counts of attempted murder and 48 counts of aggravated battery with a firearm “for each victim who was struck by a bullet, bullet fragment, or shrapnel.”

“I want to thank law enforcement and prosecutors who presented evidence to the grand jury,” Rinehart said. “Our investigation continues and our victim specialists are working around the clock to support all those affected by the crime that led to 117 felony counts being filed.”

Crimo III, 21, is accused of emptying nearly three magazine clips of 30 rounds each, fired from a semi-automatic weapon, at parade goers during the Highland Park Fourth of July festivities. Police investigators later found 83 spent shell casings on a rooftop, from a vantage point, near Central Avenue and 2nd Street.

He was apprehended approximately eight hours later, after being named as a “person of interest” by the Lake County Major Crimes Task Force.

Sources said Crimo III was taken to the Highland Park police station and admitted to the shootings. While authorities were searching the area, he had driven to Madison, Wisconsin and contemplated another attack.

The “overcharging” on criminal complaints can sometimes be viewed as a precursor to initiating discussions on a plea agreement. An accord between prosecutors and defense attorneys would avoid a court trial, especially in an emotionally charged atmosphere.

Local defense attorney Jed Stone explained the additional 110 charges will allow all the injured parties in the shooting attack to have a stake in the prosecution for the crimes.

“I don’t believe the state filed a 117-count indictment only to obtain a plea (deal),” he said. “Illinois law has developed several theories of murder, and here, the state filed three counts of murder for each victim.

“He intended to kill. He knew that his acts created a strong possibility of death. Each of these theories applies to each of the victims. There are also 50 victims of gunshot injuries. Each of them are entitled to have the state prosecute … there are multiple ways in which each of those gunshot injuries may be charged.

“Every victim, all the murder victims and all the gunshot victims, are entitled to be heard in court. How would it ever be fair to prosecute some counts and not others? How can the state tell a gunshot victim, your case isn’t worth prosecuting?”

Crimo III became a “person of interest” resulting from numerous domestic disturbance service calls made by the Highwood Police Department to his father and uncle’s residence, where he lived, and to his mother’s house by Highland Park police.

Records show two of the calls were documented in 2019, and one incident involved a threat by Crimo III to kill his family and himself. At that time, upwards of 15 knives and a Samurai sword were confiscated.

Crimo III was also active on various social media platforms that contained violent content, along with his own videos depicting a mass murder and death scenario, as “Awake the Rapper.”

Questions about his ability to obtain a Firearm Owner’s Identification Card from the Illinois State Police, as a minor, have also come into play. “Red Flag” laws were not alerted by local law enforcement, allowing him to obtain the license and purchase weapons in Chicago.

His father, Robert Crimo, a former Highland Park mayoral candidate, sponsored him in late 2019 and claimed the confiscated knives and sword were actually his possessions. The following year, the FOID card was issued.

The Lake County State’s Attorney’s office did not comment on filing charges against the father.

“None of the domestic disturbances ever came across our office, so we cannot comment on that,” said Sarah Avalos, the office’s communications specialist. “At this time, our office is not commenting on charges being brought upon anyone else. We cannot comment on any details of the case or future plans.”

“The parents … bear some responsibility in this tragedy,” said Stone. “It may not be criminal responsibility, but it surely may be civil responsibility. So do the Highland Park police and the Illinois State Police for allowing this matter to fall through the cracks. Robert Crimo III should never have been allowed to purchase firearms.

Crimo III will appear in court for arraignment on the 117 charges on Aug. 3. A preliminary hearing last week was cancelled.