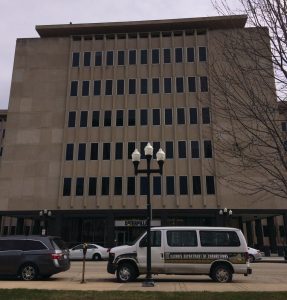 Caterpillar, Inc. has had its global headquarters in Peoria since the 1920s. (Chronicle Media photo)

Caterpillar, Inc. will move its global headquarters to the Corporate 500 office park in Deerfield, the company announced April 19.

Proximity to O’Hare International Airport, interstates and Metra commuter lines to Chicago influenced the decisions, said Caterpillar CEO Donald James “Jim” Umpleby. The company announced in January they were uprooting their headquarters from Peoria and moving operations to the Chicago area.

“This [Deerfield] site gives our employees many options to live in either an urban or suburban environment. We know we have to compete for the best talent to grow our company, and this location will appeal to our diverse, global team, today and in the future.”

Caterpillar already has an outpost in Chicago in the Merchandise Mart, where their Digital & Analytics Hub opened in 2016. The company said they expect 100 employees to relocate to the Deerfield office at 510 Lake Cook Road this year. The space formerly housed 450 employees of Beam Suntory, a “premium spirits” company that produces Jim Beam bourbon. By June, Beam Suntory will move its headquarters to 110,000 square feet of sublet office space in Merchandise Mart in Chicago, according to real estate reports.

The new Caterpillar site will be fully staffed by mid-2018, when an additional 300 people will move to the new headquarters, the company said.

The heavy equipment company has experienced turmoil in the past months with a March IRS raid and U.S. Senate investigation of an alleged $2 billion offshore profits scheme. The company also said $67 million in 2016 losses led to the announcement that Caterpillar would close their Aurora manufacturing plant at the end of 2018, laying off around 800 workers.

But Umpleby said the majority of Caterpillar employees would remain in Central Illinois mostly in the Peoria and Decatur areas.

“With our strong presence of over 12,000 employees in central Illinois, we’ll continue our philanthropic support and civic involvement,” Umpleby said.

“Caterpillar joins several other well-known national and international companies who enjoy the amenities and ease of access to transportation that Deerfield has to offer,” Rosenthal said in a press release. Deerfield did not offer any tax incentives to the company to lure them to town, Rosenthal told Crain’s Chicago Business.

Caterpillar manufactures construction and mining equipment, diesel and natural gas engines, industrial gas turbines and diesel-electric locomotives. The company has yearly international sales of $38.537 billion, according to a press release.