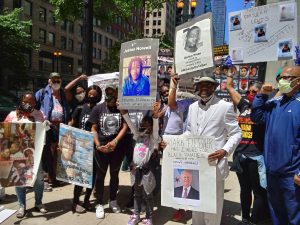 Eric Russell (in white suit), Tree of Life president, stands with other protesters from Lake County June 12. “We have George Floyds in Chicago and Lake County, and this rally is to bring attention to it,” said Russell at the protest sponsored by Tree of Life. (Photo by Gregory Harutunian/for Chronicle Media)

On April 4, 2015, Zion police officer Eric Hill shot and killed 17-year-old Justus Howell. Narratives state he was allegedly purchasing a stolen gun near a school that went off during a fight, when he tried to steal it. He passed the officer in his squad, who called in a pursuit. While fleeing, Howell allegedly turned to his left to shoot at officers, and was in turn shot twice and killed by Hill.

Problematic is lacking photos of the gun near the body as reported, and the coroner was not called to examine or make an investigation. Only grainy surveillance video exists.

LaToya Howell and Alice Howell, his mother and grandmother, came all the way from Lake County to join other families of victims in questionable police shootings to take a knee on LaSalle Street, at the front of Chicago’s City Hall. A June 12 protest, sponsored by the Tree of Life Justice League, was meant to re-focus attention on these cases in seeking answers and accountability.

The fire ignited by the May 25 murder of George Floyd, allegedly under the knee of a Minneapolis police officer, has sparked global protests addressing brutality by police as well as substantive reform in their law enforcement methods. A viral video of the killing became a flashpoint of outrage that highlighted patterns of “systemic racism” by many members of the law enforcement community against Black and Hispanic minorities. 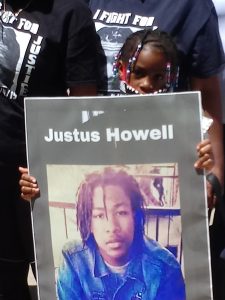 The mother and grandmother of Justus Howell, who was killed by a Zion police officer April 4, 2015, were among the protesters. (Photo by Gregory Harutunian/for Chronicle Media)

“We have George Floyds in Chicago and Lake County, and this rally is to bring attention to it,” said Eric Russell, the league’s president. “We advocate for about 40 families nationwide whose loved ones have been tortured, brutalized, or murdered by police. We need state and local officials to watch the videos of our children that were murdered. We are concerned about the state police and those municipalities that stand in the way of justice.”

Russell said the league is in solidarity with the Howell family, which is seeking an appeal to a May 2018 civil verdict that ruled the Zion officer did not use excessive force. “The fight for Justus Howell’s death is a just fight, that we will prevail in,” said defense attorney, Jed Stone. “(He was) 17 years old … shot twice in the back by a police officer from 35 feet away, as he was running away.” 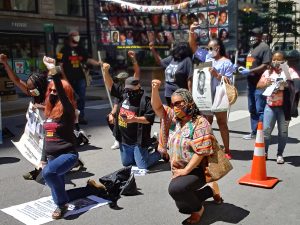 People came from Lake County to join other families of victims in questionable police shootings to take a knee on LaSalle Street, at the front of Chicago’s City Hall. (Photo by Gregory Harutunian/for Chronicle Media)

Mothers, aunts, and family members spoke about loved ones and the questionable circumstances surrounding their shootings by Chicago Police. The testimonies were given in proximity with the city hall entrance, in the hopes of bringing Chicago Mayor Lori Lightfoot out to meet them. Although she did not, two office representatives did, keeping a low profile.

Lashundia Key, mother of Aquoness Cathery, who was shot fleeing police, filed suit in March 2018 disputing the police narrative and labeling the obstructed body-cam footage and missing audio as intentional.

“I’m calling out COPA (Civilian Office of Police Accountability). They are supposed to weed out these bad cops, but they’re putting a Band-Aid on it … they’re giving them a pass to go on,” she said. “They told me to my face, while we looked at a photo of a cell phone in my son’s hand, that is a gun and a cell phone. They have video and they still don’t believe it. Shot in the back. That’s when I lost hope. That has to stop. Stop today.” 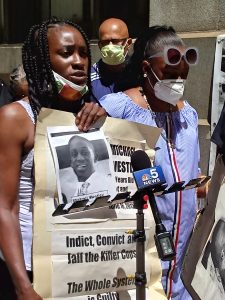 Chantel Brooks, mother of 15-year-old Michael Westley, related that he was shot eight times and was unarmed. (Photo by Gregory Harutunian/for Chronicle Media)

Chantel Brooks, mother of 15-year-old Michael Westley, related that he was shot eight times and was unarmed. The May 2013 shooting involved police responding to gunshots in the Englewood neighborhood, and chasing Westley, who allegedly pointed a gun at the officers. The report said a .40-caliber hand gun was found at the scene, and a revolver in his waistband. Brooks fought for the video footage release. Viewed in May 2016, with then Chicago Police Supt. Eddie Johnson, the incident was off-camera.

“They closed my son’s case 30 days after the shooting, 30 days … he was a minor, and I demand that (Mayor) Lori Lightfoot come out here, and re-open our cases,” Brooks said. “Our kids are being shot in the back. What other evidence (to question the narrative) do you need?”

After speaking, she related that her son was at a family party when police came. They found a BB-gun “three houses away,” but nothing on his person.

The names of alleged victims of police shootings were recited, before the group moved onto LaSalle Street, and knelt down for 8 minutes, 49 seconds, the amount of time Minneapolis police officer Derek Chauvin was recorded kneeling on George Floyd’s neck, until Floyd died. The chant rose, “I can’t breathe, we’re not going to stop until our people are free.” Police promptly blocked street access to vehicle traffic, but kept their distance

Several other marches were held the same day as the Tree of Life protest, one going through the city’s Lawndale neighborhood to the West Side apartment where Dr. Martin Luther King had lived in 1966. However, the rally at city hall carried a great impact.

“There’s no evidence that black men are a threat to police, but there is a preponderance of evidence that police are a threat to black men,” said activist, and former gubernatorial candidate, Tio Hardimann. “It’s time to repair the damage caused by the use of excessive force and brutality, and I’m calling on all law enforcement leaders to denounce the actions of some officers that have crossed the line … and work together for harmony.”