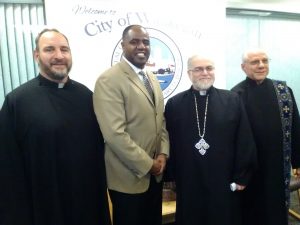 The Waukegan City Council, along with other elected officials, honored the long history of the municipality’s Armenian community while also commemorating the 100th anniversary of the Armenian Genocide, during its regular March 5 meeting.

The council unanimously passed a resolution that formally acknowledged the long residency, contributions, and achievements of the Armenian people as part of the city and Lake County fabric.

More than 70 members from the parishes of St. George Armenian and St. Paul Armenian Apostolic churches in Waukegan attended the ceremony, and marked their own resilience as viable spiritual centers. Both congregations observed Mass and special services in a side chapel of the Christ Episcopalian Church, at the northwest corner of West and Grand avenues, through the 1960s, before branching out.

“It’s more than a century of being part of our community, and a blessing that both churches have sustained themselves for that long of a period,” said Waukegan Mayor Sam Cunningham. “The Armenian community has helped Waukegan move forward through leadership with former mayors Robert Sabonjian, both the father and son, Haig Paravonian, as well as former Lake County Judge Jack Hoogasian.” 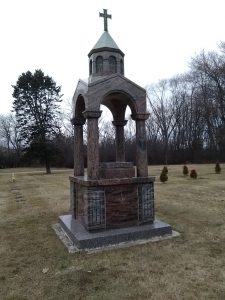 The Armenian Memorial at North Shore Garden of Memories in North Chicago marks the section of its departed community members. (Photo by Gregory Harutunian/for Chronicle Media)

“I wouldn’t have thought it, but this is recognition for Armenians that is long overdue in Waukegan,” said Katherine K. Mekelian. Wording of the resolution was incorporated by using a short history document, authored by Mekelian. It stated, in part: “In Waukegan alone, Armenians are well-represented in the professions of medicine, dentistry, law, education, as well as business and industry.”

The document also states that in 1885, (a) Mr. DerGarabedian settled in Waukegan. He, and other Armenians, like many immigrant groups that settled around the lakefront area, found employment and a way of life with the American Wire and Steel Company. “Little Armenia” evolved on the city’s South Side, bounded roughly by South and George avenues with the arterial Utica Street (MLK Avenue). It supported several family owned grocery stores, a social hall, and thriving neighborhood.

Ana Paparigian, noted, “It is well for this to be done, for us, and our children, so they won’t forget.”

Cunningham also saw the correlation between the present and the future in congratulating the young members of the Armenian community in keeping alive their values, traditions and sense of place. “Our young people, we try to protect them and give them history that would help them appreciate their pride in being Armenian.”

The centennial of the Armenian Genocide marks an attempted extermination and the martyred deaths of 1.5 million people through forced marches, torture and physical atrocities, mass killings, and starvation in a purge, orchestrated by the Ottoman Turks.

The Armenian Diaspora is scattered around the world, and yet the two Waukegan churches are focused in perpetuating the mores and social activities that are intrinsic to being Armenian. The invocation of the March 5 council meeting was led by the Rev. Daron Stephanian of St. Paul, along with the Rev. Sahak Kaishian of St. George, and Deacon David Ohanian. 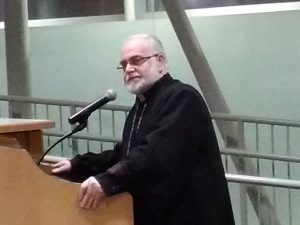 Stephanian spoke later, addressing the council about inclusion and citing that the first Armenian Republic did not discriminate based on nationality, age, or gender. “In 1918, two Kurds served as a minority in the elected parliament,” he said. “Our heritage is rich and diverse, and it was brought to this country that we may contribute.

“The green of money was invented by Armenians, Magnetic Resonance Imaging, automatic transmission … we are trying our best,” he said. “We are grateful to the great city of Waukegan in honoring us.”

Paparigian proudly held the commemorative resolution, surrounded by the assembled Armenian community and the city council, for a photograph in front of the council’s dais.

Tenth Ward Ald. Larry TenPas watched the ceremony and reminisced, “I grew up on the South Side too, on Lenox Avenue, and we lived right behind the family home of Judge Hoogasian. There was a large Armenian population. Those earlier times live on in our memories. This is a great way to keep it alive, and to keep remembering it.”