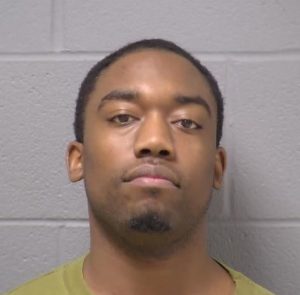 A Chicago man, who police say is a convicted felon and documented street gang member, has been charged with selling cocaine to and buying guns from Lake County undercover detectives and federal agents.

The Lake County Sheriff’s Office Special Investigations Group, in conjunction with the U.S. Bureau of Alcohol, Tobacco, Firearms, and Explosives’ Chicago Field Division concluded an undercover operation resulting in the arrest of Malcolm Brown, 31, a resident of the 2700 block of West Lexington Avenue.

In March, during the undercover investigation, Brown had numerous discussions with detectives about selling cocaine and buying firearms, Lake County Sheriff’s deputies said. They added that Brown was suspected of dealing drugs in numerous counties in northern Illinois.

Finally, on March 19, he sold more than 75 grams of cocaine and purchased three firearms from an undercover ATF agent, again in Will County, according to law enforcement officials.  Deputies said Brown was arrested at that time and found to be in possession of an additional nearly 140 grams of cocaine.

Additionally, as he was on parole, the Illinois Department of Corrections issued a parole violation warrant for Brown.

Following an initial court hearing in Will County, Brown’s bond was set at $1 million. He is next due in Will County Court on April 2.  The Will County State’s Attorney’s Office will be co-prosecuting the case with the Attorney General’s Office.

“This is what our Special Investigations Group is all about, collaborating with other local, regional and federal law enforcement to keep drugs off our streets and firearms out of the hands of dangerous felons,” said Lake County Sheriff John Idleburg. “Kudos to all of our first-responders who continue to work, keeping the community safe amid the coronavirus pandemic.”

If convicted, Brown faces a mandatory minimum sentence of six to 30 years for each controlled substance charge and the machine gun charge. He faces three to seven years in prison on each of the unlawful possession of a weapon by a felon charges.