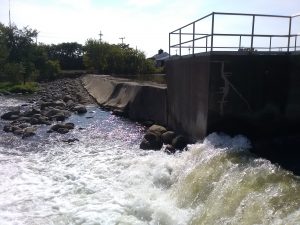 A request for aid from the Federal Emergency Management Agency for financial assistance to public entities impacted by the July 2017 floods in the four-county area declared as disaster zones by Ill. Gov. Bruce Rauner, was denied. However, individual assistance in the form of loans and grants for individual home and property owners is still on the table awaiting FEMA’s determination.

Lake, Cook, Kane, and Mc Henry counties were declared disaster areas following unprecedented rainfall in mid-July that resulted in record flooding levels and damage to property. Water-inundated sites including the Chain of Lakes-Fox River systems were part of a formal Sept. 1 declaration to Pres. Donald Trump, by Rauner. It was also hoped that any deficiencies in the accumulated financial damage totals would benefit from the governor’s involvement.

“We forwarded all the data that was compiled by teams, going door to door assessing damages, to the FEMA officials near the end of Aug.,” said Patti Thompson, the Illinois Emergency Management Agency’s communications manager. “Those teams were comprised of workers from the IEMA, the small business administration which supplies the loan funding for repairs, and FEMA people.”

The IEMA issued a press release Sept. 6, stating, in part: “In four counties…uninsured damages to public property and other eligible government such as debris removal, emergency protective measures, and repair/replacement of damaged public infrastructure related to the disaster amounted to $10.7 million. More than $8 million (of the amount) in uninsured and unreimbursed costs identified through the public assistance process were from entities in Lake County.

“Since (it) falls short of the State of Illinois Public Assistance threshold of $18.3 million for one disaster, federal public assistance will not be available for damages incurred during the July flooding for local, county, and state governments, and certain private non-profit organizations.”

The $18.3 million threshold amount is calculated for the entire state, whether only four counties or any number of counties in the state combined. “In 2013, you had 48 counties that were declared disaster areas, making it easier to reach the amount,” said Thompson. “Example costs are for uninsured amounts, deductibles, and costs such as police, traffic re-routing, sandbagging, costs from public works crews, and emergency response.”

Travel and housing costs for volunteer crews were also included in the mix. “Basically, we’re called out to a site of an immediate emergency situation like 9/11, weather-related disasters in another state, or some situations needing assistance,” said Chris DeFontaine, a FEMA volunteer, based in Island Lake. “During July, we were mobilized for sandbagging at the Nunda Township Hall, and spent about eight hours, just filling and stacking sandbags.”

The IEMA press release also stated that the request for individual assistance was still being reviewed for approval.  “The teams identified more than 3,200 homes that were damaged…related to the floods and storms…if approved, people in the eligible counties would be able to apply for grants and low-interest SBA loans.” Businesses would also be able to apply for the low-interest SBA loans.

“The SBA program is for homeowners, and the cap is set at $33,000 on grants,” said Thompson. “There was no time to waste in getting the data together, due to the FEMA regulation, submitted to that agency, and then, the president. I was with the teams canvassing the flood-damaged areas, and you could see the high-water marks, weeks later. However, the state’s standing peg was diminished by Texas and Florida.”

The Fox Waterway Agency’s executive director Joe Keller concurred that any federal assistance to the flood-ravaged Chain-Fox River systems would be deferred to areas in Texas and Florida, and now, Puerto Rico, as the devastation has reached epic proportions. “Whatever occurs at the federal level, we, the agency, will not be able to tap into it, as well as other public entities…FEMA has bigger fish to fry now.

“We knew weeks ago that the $18.3 million threshold would not be met, but the data was submitted to FEMA in the hopes that some bending of the rules might occur,” he said. “That won’t happen now. Even though, we had 8.03 inches above flood stage in Fox Lake, it’s no comparison to 40 inches in Houston. Our figure may not seem like much in comparison, but it has to be understood that an inch of floodwater is a lot. Those areas that were hit after us, were hit hard.”

The IEMA will issue a statement, when the decision is rendered for the individual assistance program by FEMA. The process for application will also be announced.

Side Story: Anatomy of a flood: The Chain O’ Lakes-Fox River systems

The mid-July rainfall that resulted in floodwater levels that surpassed the 2013 record “100-year Flood” amounts that filled the regions in the Chain O’ Lakes-Fox River systems has its origins in Wisconsin.

The flow pattern goes through Burlington, New Munster, and Wilmot before entering the Chain, the Illinois tributary path of the Fox River through McHenry, Algonquin, and emptying into the Illinois River, and eventually, the Mississippi River.

A dam was removed at Wilmot, although a sluice dam is located at the McHenry Stratton Dam and Lock, as well as one in Algonquin. The regulation and amount of water entering the system for a local source point originates with the Echo Lake dam in Burlington. The basin was created for recreation and leisure, although July floodwaters spilled over the dam’s lip and scoured the sides of the banks with water and debris.

“It was never in jeopardy of failing but the scoring of the sides and cracking in the concrete occurred,” said Steve DeQuaker, the city’s Finance Director. “Because the Wisconsin Department of Natural Resources wouldn’t pay for repairs, we had to look at it and do the inspection. There was damage to the riprap, which is a term for laying rocks and sand at the base to break what falls over.

“In simple terms, this amounts to filling in the cracks with concrete at the dam’s base,” he said. “It’s going to cost about $20,000 to complete, and the city is reviewing some other items before the job order goes out to bid.”

In late August, WDNR gave the city permission to close the gates, partially filling the lake to eliminate a “smelly” odor. One month earlier, the gate was open with floodwaters pouring over the top of the dam. The city itself was inundated, with Veteran’s Terrace park, the baseball fields, and Milwaukee Avenue bridge over the Fox River flood-out.

“People in the Fox Lake Area were complaining that the water wasn’t going down quickly, and the reason was the water coming in from Wisconsin,” said Executive Director Joe Keller, of the Fox Waterway Agency. “I don’t have the totals for the amount … it’s just easy to deduce. Looking at the system, there’s a direct correlation with the amount of water to the north.

“The State of Illinois Department of Natural Resources monitors and makes the decisions on how much water passes through the Stratton and Algonquin dams,” Keller said. “We have no control over it.”

Rita Lee, IDNR’s public services administrator had said the gates at the Stratton Dam were wide open during the flood event. The dam also underwent renovations in 2015 including the installation of new sluice gates and torque tubes. An adjacent upgrade of the dam’s boat locks included a 60-foot extension. “The locks remain closed during flood events, and are strictly for boat passage,” she said.

Gauges are also located at Nippersink Creek at Spring Grove, Nippersink Lake, and Fox Lake. The data from the gauges determines the amount of water that passes through the dam systems effecting the height of waters on the Chain.

“People had also complained the water level on the Chain was too high, for the last two boating seasons,” said Keller. “This year, it was kept low and we still flooded. No one could have predicted the amount of rainfall in such a short time span.”