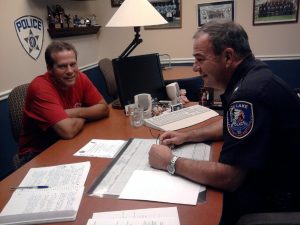 By 8:30 a.m., the officer was found dead by a gunshot wound, and one of the largest manhunts ever to take place in Lake County was set in motion.

The next three days saw federal, state, and local law enforcement agencies converge on the municipality, with reportedly as many as 400 ground personnel, four helicopters, K-9 units, and a drone with video capabilities that was called off at the last minute. The Lake County Major Crimes Task Force headed a “homicide” investigation, and immediately capped any information being disseminated.

A candlelight vigil in Fox Lake’s Lakefront Park Sept. 2, was followed by a massive visitation and funeral service attended by more than 2,000 law enforcement personnel from around the country was held Sept. 7 at the high school and Hillside Cemetery in Antioch. The time period coincided with police shootings of black suspects, which further fueled the display, organized by COPS (Care Of Police Survivors.) Yet, rumors of suicide had already surfaced.

The task force finally announced its investigation determined that Gliniewicz committed suicide, during a Nov. 1 press conference, ostensibly done to cover financial malfeasance and “laundering” of funds with the Fox Lake Explorer Post 300 bank accounts under his charge. At the time, the task force’s Public Information Officer, Det. Chris Covelli, stated, “We have over 65 pages of text messages, 40,000 emails, some that were deleted, and the task force systematically explored every tip into the death of the officer.”

It was also disclosed that the Federal Bureau of Investigation had analyzed bank ledgers, from the post’s accounts. Speculation and rumors surrounding hundreds of thousands of dollars in the bank accounts, not “tens of thousands” as portrayed, drug money, federally obtained weapons and materials being sold for profit, along with the involvement of Gliniewicz’s widow and son have never been fully explained. Also, largely forgotten, is the fate of several individuals and peripheral incidents. 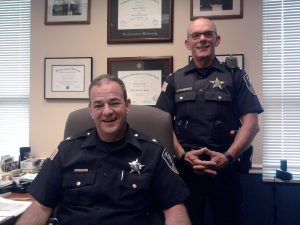 The cache of documents and materials related to the Gliniewicz investigation was under the jurisdiction of the task force until Dec. 2015, and allegedly being catalogued by the unit. Those materials, which could provide more information, were eventually delivered to the Village of Fox Lake as the host department in disarray.

“We were given over 25 terabytes of data, some with computer programs that we can’t open, and our efforts have been to sort through everything and answer the FOIA requests, as soon as possible,” said Fox Lake Village Administrator Anne Marrin. “This is very cumbersome with little collation, and we’re working as quickly as we can. It’s the sheer volume, organizing it, and seeing what needs to be redacted.”

Marrin was the subject of an alleged plot by Gliniewicz where the officer would plant drugs, or physically eliminate her. Marrin had initiated an inventory of the village’s assets, placed former police chief Michael Behan on administrative leave, and would soon discover the financial misappropriations with the explorer post accounts, leading to Gliniewicz’s suicide. Both scenarios of the death plot and suicide were forwarded by the task force, based on text message implications and cocaine found in the officer’s station desk.

“That was unbelievable … surreal,” she said.

Joseph A. Battaglia, 54, of Oak Lawn, was sentenced to one year of supervision after pleading guilty to a single charge of disorderly conduct, by Lake County Judge Brian Hughes, on Dec. 17, 2015. The former Chicago police officer had allegedly contacted the Lake County Coroner’s Office by phone Sept. 11, threatening to harm investigators, the coroner, coroner’s office employees, and task force members unless the cause and manner of Gliniewicz’s death was ruled a suicide.

“This person, at the time, was under severe stress,” said Lake County Coroner Dr. Thomas Rudd. “He was recently divorced, living alone in an apartment, he was a retired Chicago police officer, and one of his three children was dying of cancer. He snapped … I feel sorry for him. But threats should never be made to anyone.”

Kristin Kiefer, of Vernon Hills, was accused of filing a false 911 police report Sept. 2, which triggered a cordon and mass concentration of more than 100 law enforcement personnel on the town of Volo looking for the Gliniewicz homicide suspects. Kiefer claimed two individuals, one black, had approached her vehicle while it was disabled in the northbound lane of Route 12, and asked to be driven to Wisconsin.

She stated that they fled the site after she brandished a cell phone. The story unraveled when procedures for gleaning physical evidence were revealed, and Kiefer alleged she was a nanny seeking attention from relatives. The five-hour manhunt resulted in her Sept. 3 arrest, and subsequent freedom, after posting 10 percent of the required $100,000 bond.

In a recent court appearance, Lake County Judge Victoria Rossetti acquiesced to removing a 10 a.m.-5 p.m. curfew to aid in a prospective employment opportunity, pending approval from pre-trail court bond services. Kiefer’s pre-trial hearing was set for Aug. 9, with the formal trial beginning Sept. 6, where she has pleaded not guilty to several counts of making a false report, making a false report to a public safety agency, and obstruction of justice.

Vernon Randolph III, 27, had filed a civil lawsuit has filed against the estate of Lt. Charles Joseph Gliniewicz, the Village of Fox Lake, and its mayor, Donny Schmitt alleging that he was targeted as the black male, in the days following Gliniewicz’s death. The Nov.13, 2015 court filing was settled out of court last July, although terms have not been disclosed.

The document particulars state that Randolph, a North Chicago resident, was visiting the mother of his child in Fox Lake and “surrounded by ATF agents with guns pointed at him and his child and was subject to search and interrogation.” Other reports indicated as many as 16 agency units were at the scene, used a concrete battering ram to gain entry, whereby agents searched the home, and obtained a DNA swab.

It also outlined a pattern of harassment by Gliniewicz, starting Oct. 2014, with numerous traffic stops, illegal vehicle searches for drugs, and threats against his person. His attorney, Kevin O’Connor, had said that Randolph feared the officer and made no attempts to advise administration officials of the incidents.

Melodie Gliniewicz, 51, was indicted last January, by the Lake County Grand Jury, with additional charges in April, all stemming from approximately $10,000 in monies spent for personal or business use, from the bank accounts of the disbanded Fox Lake Explorer Post 300 accounts. Both the late Lt. Charles, and his widow, Melodie, had acted in a fiduciary capacity with the accounts.

Another complication is her husband’s pension through the Fox Lake Police Pension Board, which could potentially be attached as penalty fines by the court. Pension board President Fred Loffredo had said the benefits application was sent on Sept. 2, 2015 and not filed until last April, for consideration. Her benefits would be calculated in a 50 percent to 75 percent range, due to the circumstances of death, and would amount to approximately $45,000 annually, at the minimum.

A status hearing on the criminal charges was slated for Aug. 16, with a Nov. 14 trial date on the charges.