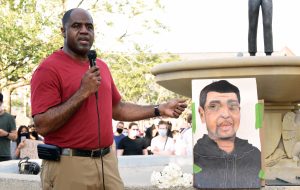 A large percentage of storefront windows were boarded up on June 3. Workers were still using buzz saws to cut plywood late Wednesday afternoon.

They nailed newly sized boards over windows of the culinary store Williams-Sonoma as people started to arrive for a 5 p.m. rally in Market Square.

If there were exposed windows in the Lake Forest retail and business district, chances are wood altered the look and facades of an upscale downtown.

About 4:45 p.m., the lawn and streets around the square were filling up with people wanting to attend the two-hour rally. They brought folding chairs and homemade protest signage.

Some people sat in the back of their cars by the train station with their hatchback rear door up, listening to the program while people-watching. 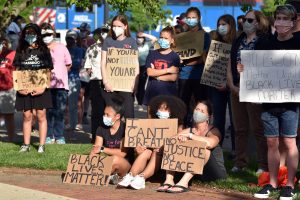 A dog was heard barking during the speeches.

The event was planned to honor the memory of George Floyd and others killed due to police brutality. It was organized by a group of Lake Forest High School graduates and students.

“We really didn’t want to have the protest in front of businesses,” said Gabriella Moore of Lake Forest, one of the organizers.

Moore said city leaders told the organizers they preferred the downtown over a suggested event location of a middle school.

“We really wish businesses didn’t have to board up, but we understand why they’re doing it,” Moore said.

The group of students began to organize the demonstration several days ago.

“I would have to second that,” said Kelsey Marx, also of Lake Forest and an organizer.

“I think we’re doing what we can do.”

Featured by the stage, which was the square’s fountain, was original artwork, a large colored-pencil drawing of George Floyd.

Audrey Marx, 12, of Lake Forest, spent all night completing the portrait in time for the rally, she said.

“He won’t be forgotten,” the artist said. “No one should be forgotten because it matters and it shouldn’t be happening. 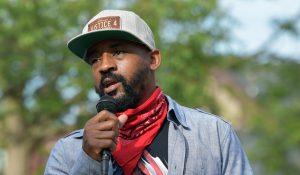 The rally was interrupted by a heckler during the speech given by Waukegan Mayor Sam Cunningham.

The person, who said he was a Waukegan resident, challenged Cunningham on Waukegan’s newer curfew of 8 p.m.

“You’re breaking your own curfew,” accused the heckler, shouting to Cunningham among the sound of boos by the crowd.

“Why can we protest here and not there (in Waukegan)?” asked the dissenter to Cunningham.

The Waukegan mayor said he wanted to focus on speaking to the audience at that moment.

“I’m always about taking care of what’s in front of you now,” Cunningham said.

Cunningham ended his speech by telling the audience, “I am so proud of you to be able to come here today, to listen to people of color, to listen to our young men, our young ladies, for trying to bring change,” he said. 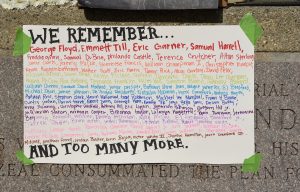 This poster was placed below the portrait of George Floyd by Lake Forest artist Audrey Marx, 12, of Lake Forest. (Photo by Karie Angell Luc/for Chronicle Media)

The evening included a call for people present to remain silent for 8 minutes, 46 seconds, the length of time endured by a handcuffed George Floyd before his death due to compression to his neck by a police officer’s knee.

As the sun set, Audrey Marx’s-signed portrait remained a bright focal point and conversation starter for when the time came for people to freely converse and enjoy social distanced fellowship on a warm evening.