Nine days after the horrifying events of July 4, people congregated on the front lawn of the Highland Park City Hall for a Community vigil July 13.

The vigil was held in response to the July 4 mass shooting at the Independence Day parade in downtown Highland Park that left seven people dead and numerous others injured. 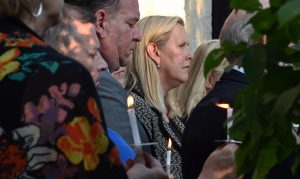 Highland Park Mayor Nancy Rotering holds a candle, during the vigil. “We are all survivors,” she said. (Photo by Karie Angell Luc/for Chronicle Media)

Police presence on Wednesday evening was apparent at the adjacent train station and along the perimeter of the vigil. Streets were blocked off for security and motorists wanting to attend the vigil sought parking within close walking distance.

A few blocks away, immediately after the vigil, people were seen dabbing their eyes or lowering their heads while visiting a memorial at Port Clinton Square near the parade route location of the massacre.

Seven chairs were set up in front of a heart-shaped memorial containing flowers, stuffed animals, Holy water, a menorah and messages of loss and encouragement, among other contributions and tributes. 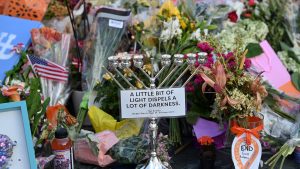 Seven chairs were set up in front of a heart-shaped memorial containing flowers, stuffed animals, Holy water, a menorah and messages of loss and encouragement, among other contributions and tributes. (Photo by Karie Angell Luc/for Chronicle Media)

“The July 4 mass shooting was the bloodiest day we have ever experienced in Highland Park caused by a hateful and cowardly individual who opened fire with an assault weapon during our annual July Fourth hometown tradition,” Rotering told the audience.

Handheld candles were distributed and later lit when Rotering indicated the appropriate time to do so.

“It is hard to speak of healing when we are in these depths,” Serotta said. “It may be true for a long time to come.

“It will be a long time before we can walk these streets or in any town without looking to the rooftops for danger from above.”

Worthington said, “Let us remember that our thoughts and our prayers, they do matter, but so do our actions. Let us now take the broken pieces of our heart and fit them back together collectively into one giant heart for our community and beyond.” 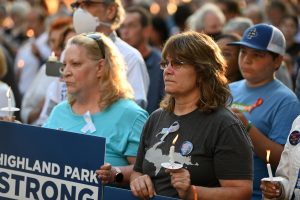 Handheld candles were distributed and lit, during the vigil. (Photo by Karie Angell Luc/for Chronicle Media)

Rotering said, “The trauma of gun violence doesn’t end when the shooting stops. Experiencing gun violence in our community has a lasting impact on all of us.

“We are all survivors. Each of us will have a different experience and a different timeline as we find a way to move forward into our new normal.

“We are Highland Park, and we are strong together.”