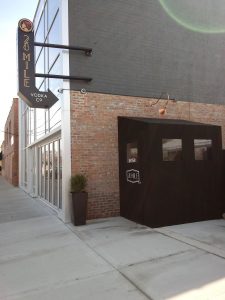 The 28 Mile Vodka & distillery in Highwood has also started to produce hand sanitizer to meet the demand due to the coronavirus pandemic. (Photo by Gregory Harutunian/for Chronicle Media)

When the 28 Mile Vodka & Distillery opened its doors to the public in Highwood in June, it was the culmination of a major effort. The building at 454 Sheridan Road was repurposed from being a linen company, and the adjacent lot which once held a transient hotel became fashioned into the outdoor patio area. Now, the arc of operations has changed.

“We’re working around the clock to try and produce as much hand sanitizer as possible,” said Mike Loveland, the business’ manager.

An emergency order issued March 18 by the federal Alcohol, Tobacco, and Firearms Bureau gave its permission for distilleries with valid licenses to begin producing hand sanitizer through June 30. The lone contingency was to follow the World Health Organization guidelines for production that included exact measures of denatured or undernatured, ethanol, glycerol, and hydrogen peroxide.

“The first small batches started March 15, and since then we’ve been ramping up production,” said co-owner Eric Falberg. “They have no supply of hand sanitizers, and we’re simply looking to fill the void. It also puts our staff back to work, after the order to close restaurants. We’re making big batches, 400 gallons, and it depends … maybe two batches in a day. Trust me, it’s not enough.

“The first in line are the first responders, we’ve been supplying Antioch, Waukegan, Deerfield, Lake County Sheriff’s Department, Riverwoods … you name it,” he said. “Any police and fire departments, just get them up here to pick up. We give free to first responders because they’re out there every day. They handle stuff, pick up people. They have no choice. There are hospital workers, and followed by the grocery store chains.”

28 Mile Hand Sanitizer, dispensed in gallon jugs, was not so much a leap of faith, but of necessity to help fight the coronavirus (COVID-19). Falberg, along with co-owners, his brother, Gregg, and head distiller, Matt Grief, decided to switch gears for the present. How much did the effort cost? “A lot,” said Falberg.

The equipment, including the boiler coming from California, the still imported from Missouri, were all specific to industry standards. The design and engineering was directly from Toronto-based Altius Architectire, Inc. who are considered an industry leader for such layouts. The partners are also looking to continue production of the hand sanitizer as a second stream of income.

“Understand that all these distilleries are stepping up to make hand sanitizer, and we’re putting out thousands of gallons because we feel it’s important enough to do this,” Falberg said. “We’re going 24/7 and fermenting the mash to capacity. There’s a brewery down the street trying to ramp up too, and we’re being allowed to use some of their equipment to escalate the production.”

When the state order came to shut down restaurant operation in mid-March, they had 14 people working at the business. The switch-over to hand-sanitizer production has brought back employees to assist in the process, and the hope of more personnel to meet the demand.

“We have two goals, one is to be a distillery and be loyal to our customers,” said Falberg. “The second is to make the sanitizer business a secondary stream of income eventually, since there will still be a demand for the product.”