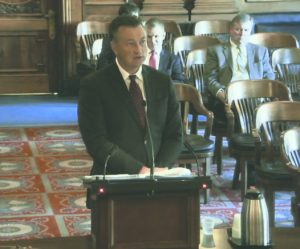 Phillip Bock, attorney representing the Lake County mom who sued Six Flags over her son’s biometric information being taken without consent when he was getting a season pass in 2014, argues before the Illinois Supreme Court in November. The Illinois Supreme Court ruled in the case Friday, saying that violation of the state’s biometrics act is grounds enough for legal action. (BlueRoomStream.com)

Businesses fingerprinting individuals or using other biometric measures without clients’ consent are subject to lawsuits, according to a state Supreme Court ruling.

The Illinois Supreme Court on Friday overturned an appellate court ruling that said individuals had to have sustained actual damage in order to have a case against a company’s unauthorized use of biometrics. The ruling means that just a violation of an individual’s biometric rights is enough grounds for legal action.

The decision came in the case of a Lake County mom who filed suit against Six Flags Entertainment Corp. on behalf of her son, who was fingerprinted as part of obtaining a Great America season pass in 2014. Neither the Long Grove boy, Alexander Rosenbach, who is a minor, nor his mother, Stacy, gave authorization for the fingerprinting to be done and they never received information about how the biometric information would be obtained, kept and destroyed, the lawsuit contends.

The Supreme Court was unanimous in its ruling that damage need not be shown to cause a violation of the state biometrics protection act.

“Accepted principles of statutory construction … compel the conclusion that a person need not have sustained actual damage beyond violation of his or her rights under the act in order to bring an action under it,” Supreme Court Justice Lloyd Karmeier said in delivering the court’s opinion.

Phillip Bock, the attorney representing the Rosenbachs, had argued that using biometric indicators, such as Alexander Rosenbach’s thumbprint in the Great America case, without consent violates an individual’s rights and should be punished.

The Supreme Court agreed, reversing the appellate court ruling and opening the door for the Rosenbachs’ case to be heard in circuit court for possible damages against Six Flags.

Citing the state’s AIDS Confidentiality Act as an example, the Supreme Court justices said the Biometrics Act does not contain its own definition of what it means to be “aggrieved” by a violation of the law.

“Applying these canons of construction, it is clear that defendants’ challenge to Rosenbach’s right to bring suit on behalf of her son is meritless,” Justice Karmeier wrote.

Attorney Kathleen O’Sullivan had argued on behalf of Six Flags that the plaintiffs did not suffer any injury from the theme park scanning the thumb of Alexander Rosenbach when he was given his season pass in 2014.

The American Civil Liberties Union had joined the suit in support of the plaintiffs.

Rebecca Glenberg, senior staff counsel for the ACLU of Illinois, said the ruling protects Illinois residents’ right to control their own fingerprints, iris scans and other information about their bodies.

“Your biometric information belongs to you and should not be left to corporate interests who want to collect detailed information about you for advertising and other commercial purposes,” Glenberg said in a statement. “The court recognized that individuals must have the right to sue companies that unlawfully collect their personal information; otherwise, the companies will not be held accountable.

“More than a decade after BIPA’s enactment, we constantly hear new examples of companies that have collected, shared and misused the personal information of millions without their knowledge or consent. The strong protections of Illinois’ law are more critical than ever.”

During arguments before the Supreme Court in November, Philip Bock had argued on behalf of the Rosenbachs, “It is the unlawful collection of the fingerprints that was the injury.”

Bock had argued that individuals are aggrieved when they have their rights violated, such as in Alexander Rosenbach’s case. “That is the harm,” Bock said.

O’Sullivan had argued on behalf of Six Flags that Alexander Rosenbach could not be “aggrieved,” if the only damage was being finger scanned without consent.

“The only way they can prevail on these questions is if the collection itself made them injured,” she argued.