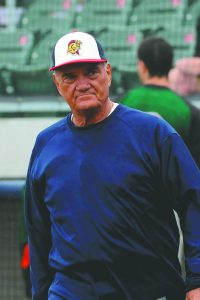 The Kenosha Kingfish open their 2019 season at home May 28 against Wisconsin Rapids, and the anticipation is already growing.

Entering their sixth season, the Northwoods League club’s personnel is undertaking the groundwork that will lead to balmy summer nights in a cozy stadium filled with flying baseballs, fireworks, and a real hometown atmosphere, just north of the Illinois state line and Lake County.

The formal unveiling of the team name, and logo, actually took place November 2013, during a chilly afternoon presentation that drew nearly 350 people to historic Simmons Field, warmed only by complimentary ballpark food staples and hot beverages. A $1.4 million facility renovation was still only 90% complete. Sparks flew from arc welders in the cold air, as the bracing pieces for a new infrastructure were being secured.

Originally built by the owner of the Simmons Bedding Co. for the factory baseball teams, the grandstand was demolished in a mysterious fire during the inaugural 1920 season, but erected again in 1930. The Kenosha Comets, part of the original four-team aggregation of the All-American Girls Professional Baseball League and made famous by the movie, “A League of Their Own,” played there, starting in 1943. They won the second half of that season before losing the playoffs to the Racine Belles.

When the league folded in 1951, the Comets ended. The ballpark then hosted a succession of college and high school sports, semi-pro teams, the Minnesota Twins “Class A” minor league team, and a period of sketchy use. Enter the Kenosha Kingfish.

Their patron saint is surely Bill Veeck Jr., as they noted his aphorism on their street marquee: “There are only two seasons … winter and baseball.” And another about “enjoying that rich feeling of being alive that only comes from sitting in a ballpark full of people … the most beautiful thing in the world is a ballpark full of people.” Considering it’s Wisconsin, the word “Gemutlichkeit” (friendliness) is thrown in there somewhere.

“All of this is close to my heart, and it’s awesome that we have a history … not only as a baseball team, but in preserving a stadium,” said Doug Gole, the team’s general manager. “I’m an outside-type of guy, working to maintain the field, if there’s rain pouring in the store, lights go out during the game, just getting into it. This place has lots of charm and beautiful surroundings … this works!”

The May 31, 2014 home opener was a target date and many different elements had to come together in time to meet the deadline, from promotional partnerships with local businesses and civic organizations to working with municipal departments for security and parking issues around the park at 7817 Sheridan Road. Nodding to “King Elvis,” the team’s mascot kingfish, parking attendants dressed in Elvis-style jumpsuits pointing to a spot in that trademark stance.

The ballpark was alive, with Amtrak passenger and freight trains running on lines beyond the right and center field fences. The announced attendance of 3,218 seemed a cautious total with no empty seats in “family friendly” surroundings. Then, there was the game. An odd play, a real head-scratcher error, and the visiting Mankato Moondogs scored first.

Kingfish catcher Jordan Romano tossed out a runner trying to steal second base, something that made the team’s manager Duffy Dyer smile. “Yeah, it did bring back memories,” he said. “You could tell?”

Dyer spent a major-league baseball career as a catcher, most notably with the 1969 New York Mets. He returns for his sixth season as manager, and served a prior stint in 1991, leading the Minnesota Twins Kenosha affiliate to the Class A pennant. Also joining the coaching staff this season is Gonzalo “Gonzo” Gonzalez, pitching coach for the nearby Carthage College Redmen.

“I’m a Carthage grad, with Kenosha in my blood, and it makes perfect sense,” said Gole. “Everyone, players and coaches, will report May 26 for practice. We’ve always been fortunate in having the best local, state, and national college-level players on our team that get coaching from great people that know baseball.”

And what of that first game? With Mankato up by seven runs, Kenosha’s last turn wrangled five consecutive walks to load the bases, and score a run. Well-placed base hits brought two more runs with Kingfish players on second and third base although the rally was cut short. Fans gave a standing ovation, despite an 11-7 loss in a game that lasted four hours and three minutes.

“We appreciate how much Kenosha has embraced us, and we want the community to know that we don’t take it for granted,” he said. “We try to keep it fresh, do it a little better each time, and the same excitement at that opener is always here.”