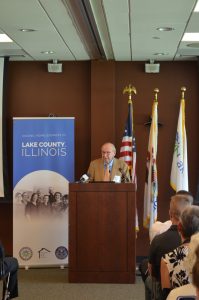 Astronaut Capt. James Lovell, for which the Lovell Federal Healthcare Center is named, spoke at the event. (Photo courtesy of Lake County Government)

Led by the Lake County Coalition for the Homeless, Lake County Government and the Lovell Federal Healthcare Center, Lake County is now among an elite group of communities throughout the nation that has officially ended veteran homelessness, based on certifications from both the federal government and Built for Zero, a national nonprofit organization.

These organizations, as well as other partners, gathered at the Lake County Central Permit Facility earlier today to celebrate this accomplishment.

Since 2015, the partners have worked to double down on quickly housing veterans, improve coordination across service providers and providing innovative solutions to barriers that were keeping veterans homeless.

“Since the beginning of our efforts, the Coalition’s partner agencies have been working together to build a seamless system of care for homeless veterans. Strong, trusting relationships in the community were foundational to achieve the goal of ending veteran homelessness in Lake County,” said Sue Shimon, president of the Homeless Coalition

Ending veteran homelessness does not mean that Lake County veterans are no longer facing challenges that may cause them to become homeless. Rather, it means that a coordinated system of care has been established that connects homeless veterans to housing and services, effectively ending their homeless status soon after they’ve been identified.

Byron Watts, a 53-year old Army veteran, described his life as full of “trials and tribulations” including a history of homelessness that dates back to 2000. All that changed when he entered the homeless walk-in center at Lovell FHCC. Watts said, “I have keys to an apartment that I can call my own now.” 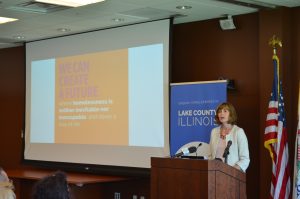 Lake County Board Chair Sandy Hart said, “This is a major accomplishment for any community and an important milestone in working toward ending all types of homelessness in our community.” (Photo courtesy of Lake County Government)

With the support of the Lovell staff, Watts is confident that he can maintain his housing.

“The homeless programs at Lovell are focused on connecting veterans to resources throughout our facility and county to help return them to stability,” said Dr. Robert Buckley, Lovell FHCC Director. Lovell also has a residential treatment program for homeless veterans.

Lake County Board Chair Sandy Hart is proud that Lake County worked with other partners to effectively end homelessness for veterans in the county.

“I’m thrilled to see organizations working together to better our community, and it’s wonderful knowing that their hard work has helped to end veteran homelessness in Lake County,” said Hart. “This is a major accomplishment for any community and an important milestone in working toward ending all types of homelessness in our community.”

While today’s celebration marks an important step, efforts will continue to prevent and immediately address veteran homelessness in Lake County.

“Our greatest need to sustain our success is housing. We need landlords willing to help veterans who have fallen on hard times to step forward and make more units available to these men and women who have served our country,” said Stephanie James of Lovell’s FHCC’s Homeless Program. Interested landlords can contact the Homeless Walk-In Center at 224-610-1148 or sign up for the landlord registry on the Homeless Coalition’s web page.

Veterans comprise only a portion of the homeless population in Lake County, and the Homeless Coalition is now setting its sights on the next big goal — ending chronic homelessness in Lake County by the end of the year.