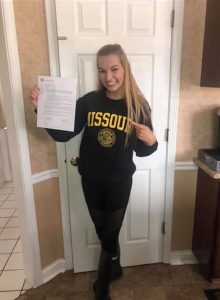 Mundelein High School senior Kimberly Barr was recently notified that she has earned the Chick Evans Scholarship for golf caddies that covers tuition and housing for all four years.

Lake County Clerk Robin M. O’Connor reminds voters to exercise their constitutional right by voting in the upcoming April 2 Consolidated Election. It’s never been easier to cast a ballot as voters can choose the way they want to vote — by mail, early, or on Election Day — without any qualifying reasons or excuses.

Voting by Mail is an ideal choice for everyone as busy schedules or bad weather could stop voters from getting to the voting site. Since voters’ ballots can be mailed to any address, this option is especially helpful for snowbirds, students away at school, and those with little free time because of long hours at work. Prospective voters only need to walk as far as their mailbox to cast their ballot. Submit a simple electronic or paper application form to the Lake County Clerk’s office by noon on March 28. Voted ballot must be returned with a postmark no later than Election Day.

Early Voting continues through March 30 at all 16 early voting sites. Four of the sites will remain open on March 31 and April 1. Regardless of where people live in Lake County, they may use the early voting site that is most convenient — near their home, office, or on the way to the grocery store.

Election Day is April 2, and sites will be open from 6 a.m. to 7 p.m. On Election Day, voters must go to your assigned neighborhood voting site.

If people still need to register or update their record with a new name and address, Grace Registration is available at any early or the voter’s assigned Election Day voting site. Applicants are required to meet all age, citizenship, and residency requirements; present valid identification; and vote at the time of registration. People can register and vote if they are currently 17 years old and celebrate their 18th birthday on or before the April 2 Consolidated Election.

For more information on Lake County Clerk services and up-to-the-minute election news, visit LakeCountyClerk.info, follow us at twitter.com/LakeCountyClerk, join our page at facebook.com/CountyClerk, or call 847.377.2400.

Vice-Chair Mary Ross Cunningham and the Lake County Board, with support of its partners, have launched the new Road to Reinstatement Pilot Program, which provides qualified individuals the ability to get their driver’s license renewed or reinstated.

Interested individuals may apply for the program by following the three steps below by March 29. Applicants will be notified if they qualify for the program six to eight weeks after the documents are submitted.

Obtain your Driving Abstract from the Illinois Secretary of State.

Return the completed documents no later than March 29 by email to communications@lakecountyil.gov, or mail or drop off the documents to the Lake County Administrator’s Office, 18 N. County St., 9th Floor, Waukegan, IL 60085.

This program will provide Lake County residents who are unable to pay an opportunity to reduce outstanding costs and get their license renewed or reinstated. The following traffic offenses will not be eligible for participation in this program:

For more information, including where to find the necessary forms, visit lakecountyil.gov/Road-to-Reinstatement, or call 847-377-2929.

Mundelein High School senior Kimberly Barr was recently notified that she has earned the Chick Evans Scholarship for golf caddies that covers tuition and housing for all four years. She will be attending the University of Missouri and has been accepted into the honors college there.

$123 million from feds for state highways and bridges

In its 2019 appropriations bill, the Federal Highway Administration awarded more than $123 million to Illinois to repair its highways and bridges.

According to a news release from Illinois Senators Dick Durbin and Tammy Duckworth, both Democrats, the state has the third-most bridges in the country with a total of 26,775.

Almost 9 percent of those bridges, however, are considered structurally deficient – the fifth-highest number in the nation.

The news comes as the Illinois Department of Transportation lays out its needs for a potential statewide capital plan, including $13 billion to $15 billion over the next 10 years for road and bridge maintenance alone.

But with infrastructure hearings from both chambers scheduled into mid-April, it is unlikely the state will finish a capital plan by this year’s construction season.

A study from the nonprofit Illinois Public Interest Research Group gave the state a B-minus rating for addressing lead in school drinking water, improving from a D grade in 2017.

On Thursday, state Sen. Heather Steans, a Chicago Democrat, advanced the Reduction of Lead Service Lines act, Senate Bill 1532, out of the Senate Environment and Conservation Committee, although she said a further amendment was needed and it will be brought back to the committee for another vote at a later date.

“What we’re working on trying to do with the bill is have water suppliers inventory lead service lines and come up with a plan to replace them,” she told the committee. “It’s complicated and we’re working with lots of different parties on it.”

The PIRG study said most schools and preschools have pipes that contain lead, making them susceptible to leaching contamination.

A state law passed in January of 2017 requires testing for lead in Illinois schools built prior to 1987 within the 2017 year, according to a PIRG press release. Schools built between 1987 and 2000 are required to have tested and submitted results to the Illinois Department of Public Health by the end of 2018.

Jerry Nowicki and the Capitol News Illinois staff contributed to these briefs.