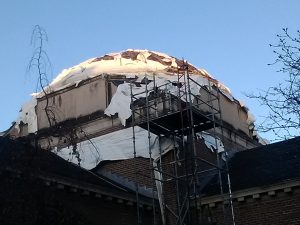 The shrink wrap covering the library dome had shredded by December, due to weather conditions. (Photo by Gregory Harutunian/for Chronicle Media)

One of the most iconic landmarks of Lake Forest is its library building, and the circular dome that sits atop the structure. The dome has now become a symbol for the library’s assessment of building preservation efforts and functional relevancy for future use, as two studies were approved by the library board for architectural service to ascertain options on restoration of the dome and the building itself.

The domed roof is above the library’s original rotunda, containing the circulation desk and 12 historic mural panels, painted by Nicolai Remisoff, and the Oskar Hansen “Archer” marble relief. “Unusual buckling” occurred with one of the murals in 2017, initiating an inspection of the dome and its rectilinear stone clad pedestal base. The 18-foot high, 33-foot wide dome was covered in November that year, with a 10.5-millimeter wrap. It has since shredded, due to weather conditions.

“The inspection recommended replacement of the leaded-copper dome and significant restoration of the masonry substructure, said Joy Schmoll, the library’s head of communications. “The potential cost of this work, given the building’s other issues, led the library board to seek expert advice and counsel.

“In November 2017, they issued a request for quotation … to examine and assess the building, its historic significance, and library functions in view of the current and future needs of the community,” she said. “In March 2018, the board selected Wisconsin-based HGA, Inc., an architectural and engineering firm, to prepare a feasibility study.”

The study was delivered in September, and encompassed the building’s functionality as a library, its aging and failing infrastructure, structural and Americans with Disabilities Act-compliance issues, it presented multiple building proposals. The library board and experts are currently reviewing these overall proposals.

“In addition, the board has requested HGA to provide options for restoration of the dome, separate and apart, from the overall building proposals,” said Schmoll. “HGA completed a thorough exploration and examination of the dome on Dec. 18, in order to prepare these options that are due next month. Those options will be evaluated by the library board, historic preservation experts, and the City of Lake Forest, including their Historic Preservation Commission, to determine the best way forward.”

For the present, the dome is scheduled to be re-wrapped before the end of year, with a 12-millimeter “SureWrap” covering to protect the library’s interior during the decision process. 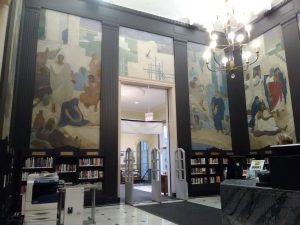 According to library documents, the building “was designed by architect Edwin H. Clark, the designer of the Brookfield Zoo, and the Winnetka Village Hall. (It) was dedicated on June 7, 1931. It was built as a library, and given as a gift to the City of Lake Forest, by Laura Shedd and Helen Shedd Reed Keith, daughters of former Marshall Field store president, John G. Shedd.

In the rotunda area, the Hansen bas-relief sculpture of the archer bears the face of Reed. Hansen was a 1910 Norwegian émigré educated at the Northwestern University divinity school, and is best remembered for designing large-scale heroic sculptures that characteristically decorated Works Progress Administration projects, in the 1930s and 1940s.

Also, in the rotunda, is a series of 12 painted art-deco mural panels depicting the Ancient Greeks, completed by Remisoff, a Russian émigré. He also designed sets for the civic ballet and opera companies before embarking on a career in Hollywood, with a style dubbed, “Russian vogue.”

Lake Forest Library Board president Ron Levtisky, said, “The board is committed to preserving the history of the building, while breathing new life into it. The dome is indispensable to the historic heritage of the Library, and Lake Forest, and we look forward to maintaining it for generations to come.”