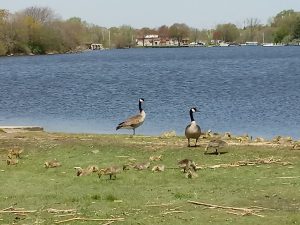 Goslings feed, as a goose and gander watch, next to Fox Lake that is devoid of boat traffic, during the COVID-19 pandemic. (Photo by Gregory Harutunian)

The Memorial Day weekend is traditionally considered to be the “unofficial” start to the boating season on the Chain O’Lakes and Fox River systems, a recreational destination for anyone looking to spend time on the water. However, this season is overshadowed by the COVID-19 pandemic and while a two-person-per-boat limit restriction was made, the Lake and McHenry county sheriff’s marine units have tacitly said it will not be enforced.

Gov. J.B. Pritzker issued the restriction, during an Apriil 25 press conference, citing the “stay-at-home” orders and that it would also extend to families with a May 1 effectuation date. The Illinois Department of Commerce and Economic Opportunity also disseminated similar guidelines for boating that included a “no exceptions” policy.

However, the Lake and McHenry county sheriff’s departments have issued their own statements indicating that such enforcement will not be a priority for their respective marine units, which are charged with overseeing compliance to maritime and state-ascribed laws on the waterway systems.

The first salvo came in a May 6 statement from Lake County Sheriff John Idleburg, which said, in part, “The latest governor’s executive order defers boating guidelines to the DCEO … I directed my staff to seek further guidance from state officials and DCEO on enforcement provisions of this, and whether or not it applies to families who reside together. All of the responses we’ve received from our inquiries indicate local law-enforcement has full discretion on enforcement of the boating provision.

“Therefore, we are exercising this discretion and I’ve instructed my staff not to issue citations to families who are who are utilizing our Lake County waterways. It is my hope people will not take advantage of this by inviting friends and nonfamily members on their boat. This is not the time to take to the waterways to party. It is important for everyone to remember, abuses of our discretion or violating the temporary regulations issued by the Fox Waterway Agency could result in the Chain O’Lakes being closed.”

The FWA, a state-mandated agency that maintains and improves the quality of the waterways, presented its own directions in an April 28 state of emergency order such as anchored boats keeping a minimum 10-foot distance, not tying two or more boats (and recreational equipment) together, as well as a temporary ban on rafting.

However, the McHenry County Sheriff’s Department mirrored the Lake County response, as of May 12, and will not enforce the passenger limit and instead deferred to voluntary monitoring. Sgt. Aimee Knop, the department’s Spokesperson, responded in an email and cited Pritzker’s statement in conveying that the department does not have the capacity or desire to police individual behaviors.

“The McHenry County Sheriff’s Office has no plan to make either the Governor’s order or the DCEO guidelines an enforcement priority unless it becomes absolutely necessary. The Sheriff’s Office does encourage residents to self-monitor and voluntarily comply with the updated orders related to boating, while anchored and underway,” she said. “We will continue to work with the FWA, and other law enforcement agencies that patrol the waterways.

“It is our duty to ensure the safety of all citizens within McHenry County, as a priority, whether it on land or water,” she said. “With the governor’s order, voluntary compliance is essential in moving forward along the road to a revitalized and restored community. The community’s safety and well-being, mentally and physically, are of the utmost concern.”

FWA Executive Director Joe Keller understood the actions, while highlighting that public safety is at the forefront of any actions. “Our agency is tasked with overseeing the waterway, and it is tied to safety … we took a proactive approach from the get-go with our April 28 guidelines. The last executive order issued by the governor didn’t cite two people per boat. That was taken by local law enforcement as a means to provide flexibility in how to make their decisions.

“They are the enforcement arm, and they are concerned with safety … people not tying their boats, having licensing,” he said. “People can be safe. We’ve always advocated that the waterway is an excellent place to quarantine. There’s plenty of open space, we have a 7,100-acre area for fresh air, and sunshine, for Vitamin D.”

To find out about water levels and conditions on the upper  and lower Fox River, as well as the Chain O’Lakes, go to www.foxwaterway.com for the most current information.