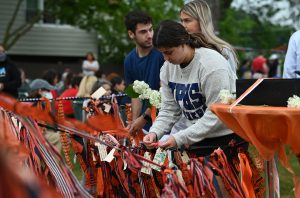 More than 2,000 people attended a candlelight vigil in downtown Highwood on July 6 at Everts Park.

Celebrate Highwood, the nonprofit organization that produces events for Highwood, canceled its regular programming for the Wednesday Evening Gourmet Market at the park to invite the community to a vigil.

“Rather, we want Everts Park to become a haven for community to gather and honor the victims, survivors and all those impacted by this senseless tragedy,” Celebrate Highwood said in a press release.

Two days earlier at the Fourth of July parade in downtown Highland Park, a suspect from Highwood, Bobby Crimo, fired bullets into parade spectators, killing seven people and injuring many.

At Everts Park, which is a venue for many Celebrate Highwood events, there were no vendors or sponsors on July 6. More than 1,000 candles in various forms instead were distributed.

Attendees could write messages on cards and attach them along with orange fabric to a #Enough traveling art display.

More than 2,000 people turned out for the vigil July 6. (Photo by Karie Angell Luc/For Chronicle Media)

“Tonight we are gathered as one community in support of our big sister next door, Highland Park,” Pecaro said. “I personally would like to extend the city’s deepest condolences to the families and friends of the victims.”

Rabbi Michael Sommer of Highland Park, of Har-Shalom Synagogue of the Highland Park area, addressed the audience, saying, “We need to be here but none of us want to be here.

“We pray for answers where there are none, all of us are tired of praying for change,” Sommer said. “We turn to each other to comfort one another, to give each other the strength to carry on, to work together, to bring more light into this world.” 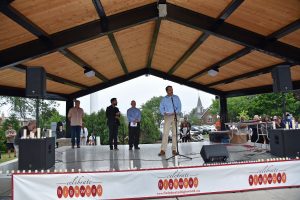 The Rev. Hernan Cuevas, pastor of Immaculate Conception-St. James Parish of Highland Park and Highwood, also spoke, wanting, “to share a message of peace and comfort” and “making sure that we are all safe and protected by acknowledging who we are but accepting each other.”

People of all ages were in the audience. Henry Nishioka, 13, a rising eighth-grader of Highland Park, attended with parent Melissa Federman. He was “here to honor the people who lost their lives and were injured in this terrible thing that happened,” he said.

Melissa Federman said, “We need gun control, we need gun reform, we need the assault rifle ban back in place.”

John Ludwig of Frankfort performed “Amazing Grace” on bagpipes as a uniformed member of the Medinah Highlanders pipe and drum band.

“We’re (Medinah Highlanders) usually in that (Highland Park Fourth of July parade),” Ludwig said. “But we weren’t this year just due to kind of an anomaly, we were in Minneapolis for something, a competition. And when I heard about this, you know, it was that feeling like I would be there but I wasn’t there. Well,” Ludwig said, “what can I do about that? 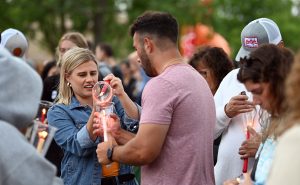 “I just felt like I wanted to reach out and if I could help people in any way musically, you know, just offer my services.”

“I think it’s important to send a message to this whole country that enough is enough,” LeCavalier said. “This needs to end and change needs to happen immediately. This is just horrible and devastating.”