The coronavirus pandemic is impacting how one Lake County soup kitchen is serving guests as part of a trend for agencies having had to adapt to the coronavirus restrictions.

The Most Blessed Trinity Parish Soup Kitchen, 914 8th St. in Waukegan has responded by converting its dine-in service to carryout. 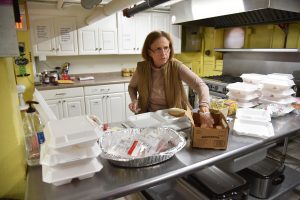 For example, on March 19, volunteer meal servers stayed inside a church building doorway, wearing plastic gloves and blue protective face masks, as they handed out sack meals to recipients.

“Because of the situation right now with the COVID-19, what we’re trying to do is to keep social distance,” Puentes said.

Takeout meals came in white insulated containers with dedicated portions and a primary spot for a sandwich.

The meals were made and assembled by volunteers in MBT’s commercial kitchen. 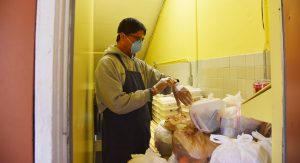 “Instead of having people come in the front door, I’m just going to open the front door and have everything set up on tables, just serve across a table to our guests coming to the door,” Puentes said, explaining the process about 90 minutes before the one-hour meal distribution.

“Right now, you don’t find another way to do that in a safe way for ourselves and for our guests.”

Some meal recipients arrived on foot. One man carried an umbrella to collect his takeout meal.

Under the blue canopy leading to the church building, one woman asked other patrons if she could go inside to sit down to dine.

But then it became obvious to her that social distancing created a revised arrangement.

She accepted her meal and was seen checking the contents as she walked away.

There was humor by volunteers to help make their shift pleasant.

Puentes said that it felt like Halloween handing out food from inside a doorway. Puentes was assisted in the distribution task by longtime soup kitchen volunteer Joan Zupec of Wadsworth.

“A lot of people know us,” Puentes said, as he stacked meal boxes on a table with Zupec’s help. 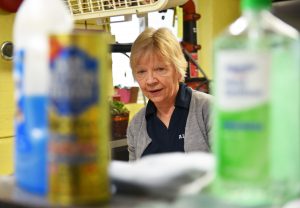 “And they see that this is a different situation and for the most part there’s gratitude,” Puentes said.

There was a knock at the door at 5:17 p.m. Puentes saw a hopeful someone through the small rectangular window on the door.

“He was asking, ‘Aren’t you gonna be cold?’” Puentes said to Zupec after the man left. “He was concerned that we would be cold. It’s not that bad right now,” Puentes said.

“It feels good,” said Zupec, who wore a fleece shirt.

The Archdiocese of Chicago announced recently that there will be no public celebrations for Holy Week or Easter.

The directive came after the archdiocese closed its schools and suspended public masses.

More Catholic churches have launched recorded or live-streaming of masses to feed the soul in this era of social distancing.

To feed the hungry, the Most Blessed Trinity Soup Kitchen, which has operated for more than 30 years, has kept its regular schedule, Wednesday through Saturday, year-round, including holidays such as Thanksgiving which falls on a Thursday.

“And people come and have the expectation that they’re going to find a meal in Waukegan by coming to our soup kitchen. 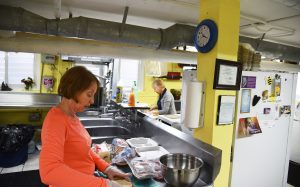 “But it’s just one of many soup kitchens that exist.”

Zupec said she loves the Most Blessed Trinity Soup Kitchen, “Very much.”

“I just feel so lucky to be able to take care of myself, have plenty of what I need and I’d like to help others who need a little hand in getting what they need,” said Linda Palazzo of Deerfield.

Palazzo was joined in the commercial kitchen by fellow volunteers Pat Basbagill of Lincolnshire and Beth Krenzer of Deerfield.

Krenzer said, “We do the third Thursday of the month. 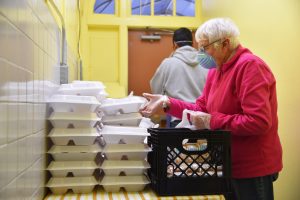 “We normally do a big sit-down meal of pork loin, mashed potatoes, corn on the cob, etcetera,” Krenzer said. “So this is different for us, but it’ll be a lot safer.”

Krenzer explained why she volunteers.

“I’m the type of person, I don’t like to talk, I don’t like politics and all that, I like hands on,” she said. “I was in manufacturing for years and I’d rather do something with my energy to help other people. And I like the soup kitchen. It’s a great facility, it’s well run, it’s fun too.”

Basbagill made sandwiches and also participated in sanitizing workstations as their church’s volunteer shift ended.

“It’s a good feeling to be able to help people,” Basbagill said. “There is need. There are inequities. We have to help out.”