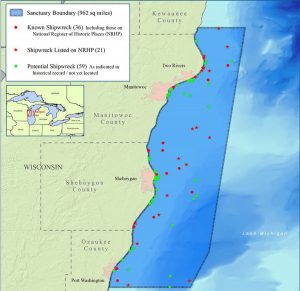 A 962-square-mile area of Lake Michigan has been designated as a national marine sanctuary to protect important habitats as well as safeguard shipwrecks that played a critical role in the nation’s early history.

The National Oceanic and Atmospheric Administration recently announced creation of the Wisconsin Shipwreck Coast area along the northwest shores of Lake Michigan.

Such sanctuaries are protected waters that include important habitats and, in cases like this one, archeological sites.

Co-managed with the state of Wisconsin, the sanctuary will expand on the state’s 30-year stewardship of these historic sites, bringing new opportunities for research, resource protection, educational programming, and community engagement.

In partnership with local communities, the sanctuary will also provide a national stage for promoting heritage tourism and recreation.

The Wisconsin Shipwreck Coast National Marine Sanctuary will protect 36 historically significant shipwrecks and related maritime heritage resources, 21 of which are listed on the National Register of Historic Places. Well-preserved by Lake Michigan’s cold, fresh water, several of the known shipwrecks are essentially intact and look much like they did when they sank. The area also includes Wisconsin’s two oldest known shipwrecks, and archival research suggests there may be dozens more yet to be discovered.

Spanning the early 1800s through the 20th century, the shipwrecks represent a cross section of vessel types that played critical roles in transforming the Great Lakes from a maritime frontier into the nation’s busiest waterway. The ships carried grain and raw materials east as other vessels traveled west loaded with coal, manufactured goods, and settlers. 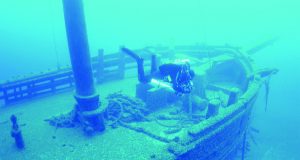 A diver swims through the wreckage of the Walter B. Allen schooner, which sank in 1880. (Tamara Thomsen, Wisconsin Historical Society)

“The designation of this sanctuary is a milestone for NOAA, Wisconsin, and the nation,” said Nicole LeBoeuf, acting director of NOAA’s National Ocean Service. “This new sanctuary opens the door to world-class research, educational opportunities, and tourism for generations to come.”

The sanctuary designation will take effect following 45 days of continuous session of the U.S. Congress after publication of this action in the Federal Register.

“We’re really excited about NOAA’s announcement,” said Wisconsin Gov. Tony Evers in a statement. “The designation builds on 30 years of maritime heritage preservation by the State of Wisconsin and will create exciting new opportunities in education, recreation, and tourism in our coastal communities.”

“I worked to support state and local efforts on the nomination of this area of Lake Michigan as a new national marine sanctuary and together we are getting the job done,” said U.S. Sen. Tammy Baldwin of Wisconsin. “Our Wisconsin Shipwreck Coast National Marine Sanctuary will protect and preserve historic sites, bring new opportunities for research, and boost our local tourism economy.”

This is the most recent sanctuary designation since the protection of Mallows Bay, Maryland, about 40 miles south of Washington, D.C. in 2019.