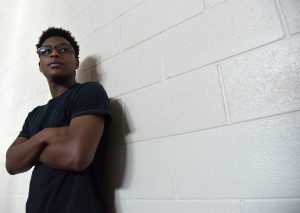 The estimated 90 students attending the fifth annual Success Assembly May 25 at North Shore Academy were urged to dream big.

“You’ve got to dream it, believe it, achieve it, and that’s what we’re all about,” said Chuck Sheftel of Highland Park, service learning specialist and emcee.

“If you’re not scared of your dream, then it’s not big enough.

The end-of-school year assembly at the Highland Park-based school had a theme of “Dream.” North Shore Academy (NSA) is a therapeutic school at 760 Red Oak Lane and part of the Northern Suburban Special Education District (NSSED). 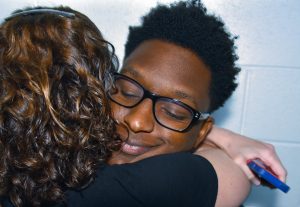 Jordan Davis is greeted by a well-wisher.

“They’re all messages about personal growth and personal goals but we’re really celebrating all of the students,” said Steve Donart, transition counselor and Success Assembly producer.

“All of their dreams are one step farther along.

“That to me,” Donart said, “is what success means.”

Student awards were given for exemplary recognition of the four basic values the school emphasizes: belonging, mastery, independence and generosity. These are the Circle of Courage principles that NSA advocates for student growth and change. 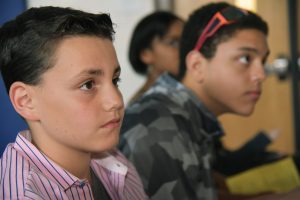 Alex Harris (left), 12, of Northbrook and a sixth-grader, Seth Katz, 14, a freshman from Deerfield and Robyn Cade, 16, a sophomore from Highland Park attend the fifth annual Success Assembly May 25, 2016 with a theme of “Dream” at North Shore Academy in Highland Park (760 Red Oak Lane).

The word, “Dream,” was featured as a hanging stage prop surrounded by white lights.

“The success assembly is a cornerstone event for us because it showcases the magical combination of talent and persistence in our students,” said Doug Bolton of Evanston, NSA principal.

“Their stories and their performances display a vision for their lives and a commitment to their craft that inspires all of us,” Bolton said.

The afternoon program included success stories by students. Robyn Cade, 16, a sophomore from Highland Park, sang her solo. Alex Harris, 12, of Northbrook and a sixth-grader, performed on acoustic guitar. Jessie Beckford, a senior from Evanston, offered a solo rap performance. 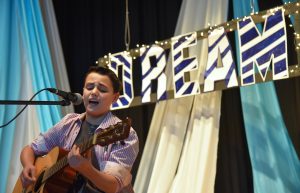 Alex Harris, 12, of Northbrook and a sixth-grader, performs during the fifth annual Success Assembly May 25, 2016 with a theme of “Dream.” (Photo by Karie Luc for Chronicle Media)

“It (the song) means that I can never give up on my dreams and that I can always believe in myself and others,” said Alex, who is also a student at Wood Oaks Junior High School in Northbrook.

“It (NSA) helped me explain my feelings and I really needed that.”

Alex hopes to become a lawyer or public relations professional.

His immediate dream, written in black, blue and purple marker on a white paper cloud by the stage with other cloud-shaped goal posters, read, “Go full-time at Wood Oaks and get into a good college.” 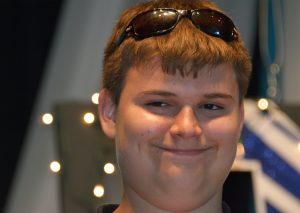 Will McCall (left) of Glencoe is recognized during the fifth annual Success Assembly.

“All in all, North Shore Academy was there for me, for my anger issues,” Davis said.

“I would definitely say they molded my potential so that I would make the right decisions.

“To see the progress he’s made is why I do my job,” said Jennifer Wagrowski, an instructor who taught Davis when he was a NSA middle-school student.

NSA has an enrollment of approximately 110 students in kindergarten through twelfth grade.