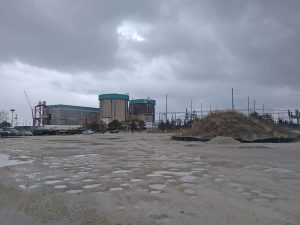 The decommissioned Zion Nuclear Power Plant structures, including the storage silos, will be dismantled in 2018, by the subsidiary of the license-holder, Salt Lake City-based Energy Solutions. (Photo by Gregory Harutunian/for Chronicle Media)

Since 1998, when the Zion Nuclear Power Plant was decommissioned, the city has suffered through financial hardships in lost property tax revenues and the stigma of storing hazardous spent nuclear fuel rods on its lakefront.

In March 2016, an intergovernmental agreement was struck between the city, Zion Township, the Zion Park District, the Zion-Benton Township High School District 126, and the Zion-Benton Public Library District seeking the removal of the waste or funding for storage.

At that time, it was disclosed that legislation was being developed to address the issues. The STRANDED (Sensible, Timely Relief for America’s Nuclear Districts’ Economic Development) Act, the proposed legislation, was announced during an Oct. 1 press conference which brought U.S. Sen. Tammy Duckworth, Rep. Brad Schnieder (D-10th), state Sen. Melinda Bush (D-31st) and Zion Mayor Al Hill to the plant site.

The pending bill will be introduced in the Senate by Duckworth, and the House by Schnieder, although no timetable has been set for submission and consideration.

“It will be presented soon,” said Steve Kirsch, communications director for the Schnieder office.  “We’re having very productive discussions with Republicans to build bi-partisan support. The legislation is written, and it is aimed at economic relief.” 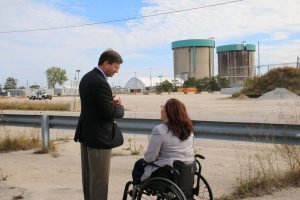 The bill would provide communities such as Zion with $15 per stored kilogram of stored nuclear waste in the form of impact grants, of which, Zion has 65 casks containing 1,020 metric tons in spent fuel rods that equates to nearly $15 million per year. The bill would also create a task force to identify assets in the designated community, provide incentives such as tax credits for existing “New Markets” credit eligibility, and reviving an expired tax credit for first-time homebuyers purchasing a home there.

“For years, communities have been forced to house this waste without consent or compensation, despite the immeasurable negative impact to their local economies,” said Duckworth, in a statement. “Since the federal government has failed to open a permanent repository and it could take years to move the waste after one is agreed upon, the STRANDED Act will help affected areas around the country that are facing hardship now. Zion can’t wait any longer.”

Schnieder viewed the legislation as a first step toward rectifying a glaring problem.

“Zion and communities like it have been unfairly saddled with storing our nation’s stranded nuclear waste, and forced to shoulder the burdens of storage with no compensation in return,” he said. “The federal government needs to make right by these communities. This bill I’m introducing, with Sen. Duckworth, would bolster Zion’s economic development.

“(It would) finally compensate the city for its storage of the waste, offering tax incentives to encourage private investment and homeownership, and better ensuring access to all available federal resources. Addressing this issue is a matter of basic fairness for the communities paying the price for our government’s failure to find a permanent solution for spent nuclear fuel.”

The Zion plant was constructed and went into operation during the early 1970s, under a boon for nuclear energy facilities as a low-cost and efficient source for electrical power, championed in Illinois by Excelon Corp., the parent owner of Commonwealth Edison. The city ceded more than 430 acres of lakefront property in the premise of job creation, and tax benefits from the site’s increased equalized assessed valuation.

By the late 1970s, detractors noted that such plants had an approximate life expectancy of 25 years. The federal government passed the Nuclear Waste Policy Act in 1982, charged a fee of one-tenth of one cent per kilowatt hour to customers, based on the eventual storage of spent fuel rods. By 2014, the national total collected was nearly $40 billion, with annual interest yields tabbed at $1.3 billion. Those amounts were broken down into calculated disbursement allotments for areas with nuclear storage sites.

The act was allowed to expire in 1990, and initiatives for the relocation of nuclear waste were abandoned in 2010. That same year, the transfer of Exelon’s license was approved for the Salt Lake City-based Energy Solutions. Part of a now broken understanding by ComEd with Zion was that the land would be returned to its initial condition, and prepared for development, according to Hill.

Zion Solutions, an adjunct of the Utah license holder, announced in mid-September that it would dismantle and remove the plant’s buildings and structures including the 20-story silos, starting next year. However the Yucca, Nev. storage site for the nuclear waste has not come to pass, and the facility has no slated operation date. Zion, and other similar communities, are forced to store the hazardous materials until the federal government determines a course of action.

“The legislation was developed with us (Zion) in mind, addressing our situation, but all across the country, with short-term and long-term development options,” Hill said. “All of these nuclear power plants will be decommissioned at some point, and then what? The waste was being stored at Yucca, but that was stopped. The other thing is our vulnerability to a terrorist initiative.

“We’ve been assured that this can’t happen. They tell us that it’s safe, it’s secured … if that’s the case, why are there armed guards if nothing can happen at this site?”

Kirsch said, “We do need a more permanent solution. For the meantime, we are seeking relief for the economic impact of holding the waste. This legislation is about economic relief to these communities.”

At the Oct. 1 press gathering, Bush said, “No city should have a financial burden of an abandoned facility. As someone who has fought this battle at the state level for years, this legislation could make monumental changes at the federal level,” said Bush.