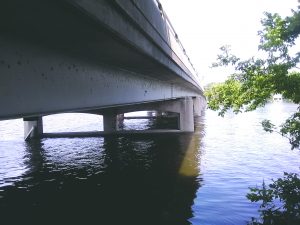 Despite the lifting of boating restrictions on the Chain O’ Lakes-Fox River waterways systems heading into the Memorial Day weekend, heavy May 23 rains have reinstated a “no wake” limitation for the area between the McHenry Stratton Dam and the Algonquin Dam, due to debris and rising water levels.

The rest of the system remains open for recreation, however the northern portion of the watershed in Wisconsin received large downpours of rain, and indications may lead to another closure.

Memorial Day has traditionally marked the unofficial opening of the boating season for the waterway systems, but climate change has altered that aspect as witnessed with the “100-Year Floods” in 2013 and 2017. Floating debris and other navigational hazards, remnants from the winter, have also accompanied the opener time period. The Fox Waterway Agency is monitoring those developments and reacting accordingly.

“With those rains, the situation has substantially gone to a very strong indication that the Fox River will be closed again, although that decision comes from the Illinois Department of Natural Resources,” said Fox Waterway Agency Director Joe Keller. “That’s where the water level numbers are headed. Coupled with the ‘no wake’ status and what has occurred in the May 23 recent rainfall and model projections, the Fox Lake gage should crest at the six-foot mark.

“The New Munster, Wisconsin gage was supposed to crest May 26, and we are usually a few days behind for the water flow, so you’re looking at three days later,” he said. “There is a meeting June 19, of the Fox River Commission, that will be looking into new ways that take changing weather patterns that have been shaped over the last decade. It takes a proactive direction in finding a solution to the problem.” 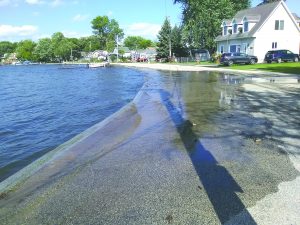 The present concerns over flood alleviation were displayed in 2017 with a photo of the Eagle Point Road section, and another from the same spot 12 hours later. (Photo by Gregory Harutunian/for Chronicle Media)

At the same time, the Lake County Stormwater Commission is researching prospects at increasing the size of water retention ponds for new commercial and residential developments within the county, and McHenry County is also entertaining the same options, according to Keller. The options will encompass handling future rainfalls to prevent excess waters from entering the lakes and minimize flooding.

Although IDNR lifted all boating restrictions on the waterway May 21, with an advisory that debris such as large tree limbs and flotsam merited caution from boaters. The closures affect the waterway agency in removing waterborne debris, as they must adhere to the same restrictions.

“For now, the debris on lower portion of the Fox River … not a lot has been removed, even though it is a focus for us, and we’re dispatching boats to those areas to alleviate those concerns,” said Keller. “Our guys work quickly, and the ‘no wake’ is something we must abide too. There will be two boats stationed in the lower river area that will make a huge dent in getting the job done over the next few weeks. Ideally, the water levels are back down and the system would have remained open on upper and the lakes.”

As always, when water levels impact the boating season, it becomes tantamount to a decrease in revenues captured by commercial entities that depend on the Chain and Fox waterway boat traffic for their livelihoods.

“It’s a clear call that our natural resources such as the Chain O’ Lakes have a huge impact on our economy and tourism,” said Michael Garrigan, Antioch’s community development director. “The seasonal aspects are simply that the economy picks up during the summer, with businesses and restaurants. The lake has an impact on those numbers, and it’s mitigated by development commercially in our downtown.

“We have one real area, Lake Marie, the other nearby lakes in the chain are in unincorporated Antioch Township. The downtown has numerous restaurants and specialty shops and when the season picks up for boating, they will visit the downtown,” he said. “Empirically, in talking to businesses … when the weather is cooperating and bringing boaters, it impacts their businesses.”

Keller is receptive about the concerns, and said, “We’re in their corner, and as an agency, we’re doing more than we can at the waterway.”

Boaters are urged to monitor water level conditions starting week of May 26, as changes for open waters may be changed, along with notifications of additional debris and navigational hazards.