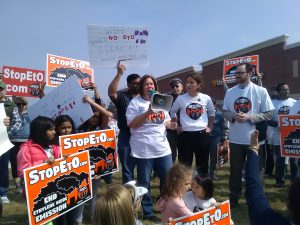 The Gurnee-based StopEtO.com coalition held an April 6 rally in a busy retail corridor, seeking to raise awareness about Ethylene Oxide (EtO) emissions from two Lake County sites. More than 300 people crowded around the southeast corner at the intersection of Hunt Club Road and Grand Avenue with signs, balloons, and exhortations to passerby drivers about halting the carcinogen’s spread.

Vantage Specialty Chemicals in Gurnee and Medline Industries in Waukegan use the chemical for equipment sterilization, and drew attention in October, following similar disclosures on emissions at the Sterigenics facility in Willowbrook. The U.S. Environmental Protection Agency changed the classification of Ethylene Oxide from a potential carcinogen to known carcinogen in December 2016.

“I serve on the state’s Energy and Environment Committee, and I live just down the street from the rally site,” said Rep. Joyce Mason (D-61st) before addressing the April 6 crowd. “We’re fighting for testing for EtO, we have plants in the area that are the emitting cancer-causing EtO, and we just want answers for our families. We have a joint house resolution in process asking the federal EPA for full testing here in Lake County.”

At the rally, Rep. Daniel Didech (D-59th) also spoke. “If there is one takeaway from today … what you are doing is working. We hear you … in Springfield. We are up against very powerful, very well-entrenched forces. These industry executives and their lobbyists tell us in Springfield that EtO is nontoxic, and not dangerous. This is the same thing we heard from tobacco companies.”

The Lake County Health Department, through its environmental health services department, issued a press release April 8 that an independent contractor will be hired to conduct emissions sampling beginning June 1. A vendor will be selected in May by officials from the Village of Gurnee and the City of Waukegan. The sampling is slated for every third day over a one-month period. On-site and off-site testing, as well as their placement, will adhere to federal EPA guidelines to further a health risk assessment.

“We had been looking to both the state and federal environmental protection agencies since last November, with not much assistance,” said Hannah Goering, the county health department’s Communications Manager. “Health Department Director Mark Pfister met with municipal officials March 26, and addressed the Lake County Board April 8 on the emissions testing and moving forward in addressing this issue.

Kim Biggs, the IEPA’s communications specialist, said, in an email, “There isn’t a (current) certification of added emissions controls or emissions reductions. However, at a minimum, there would be confirmatory emissions testing associated with the added controls, conducted by third parties and performed, pursuant to an IEPA reviewed test plant. The IEPA has been working diligently with both (county) facilities to take steps to

“We expect Vantage to complete the installation of additional emissions controls by mid-April,” she said. “While Medline finalizes plans … the IEPA continues to work with the facility to develop the necessary modeling to produce a strong ambient air monitoring protocol for the facility.”

The Lake County problems came to light late last year with a reporting error by the IEPA correlated to federal reporting threshold levels.

Francisco Arcaute, spokesperson for the US EPA, replied in an email, saying, “The most recent National Air Toxics Assessment was issued last Aug. 22, and NATA is the EPA’s screening assessment designed to help state, local and tribal air agencies identify which pollutants, emission sources, and places they may wish to study further to better understand any possible risks to public health from air toxics. NATA is not an indicator of absolute risk.

“The U.S. EPA’s updated assessment of ethylene oxide was released in December 2016.  The assessment included a change in risk value for ethylene oxide,” he said. “That value is not a standard; it is a measure of how much ethylene oxide needs to be present in the air to produce an effect. NATA is developed using the National Emissions Inventory, which is a different database. States voluntarily report air toxics emissions to the NEI, a comprehensive and detailed estimate of air emissions of criteria pollutants … air toxics from emissions sources across the country.”

Biggs said, “To clarify, this is not specific to emission levels but based on the emitting units. The rule for the Illinois EPA’s annual emission report only requires a company to report Hazardous Air Pollutants for emission units, subject to National Emission Standards for Hazardous Air Pollutants, or Maximum Available Control Technology. Since the units in question did not meet this requirement, Vantage left the information for ethylene oxide as blank in 2014.

“As a result, in 2014, it was inadvertently entered as a zero on the National Emissions Inventory. If a zero is entered in NEI, hazardous air pollutant emissions specified on the national Toxic Release Inventory are not back-filed for a given facility,” she said.  “In other words, Ethylene Oxide data reported by Vantage to U.S. EPA, on the TRI, did not get back-filed on the NEI, because a zero was inadvertently entered instead of being left blank.”

Neringa Zymancius summarized the viewpoint of Willowbrook residents and activists, who attended the April 6 rally. “We’ve been fighting this since last August, and neighbors support neighbors. The chemical council simply wants to make profits over our people.”