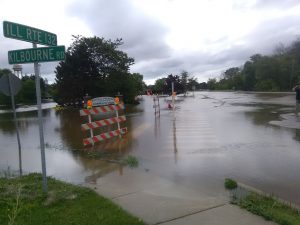 A view of Grand Avenue at the Des Plaines River Bridge in Gurnee.
(Photo by Gregory Harutunian/for Chronicle Media)

The Chain of Lakes and Fox River regions will experience more severe flooding, as the Echo Lake Dam in Burlington, Wis. has developed a crack from the stress of retaining record storm water, from the Fox River’s Wisconsin north to south flow. The July 14 discovery added to an already tenuous situation with excess water already spilling over the top of the embankment.

Gov. Bruce Rauner declared Lake, McHenry, and Kane counties as disaster areas, due to the floodwaters. The July 14 announcement came on the heels of a proclamation, signed by Lake County Board chairman Aaron Lawlor, two days before. The statement declared Lake County a disaster area, and it was submitted to the governor’s office and the Illinois Emergency Management Agency.

Lawlor, through a prepared statement, said, “I want to thank our public works staff, first responders, volunteers and neighbors across Lake County who are helping us respond to what is expected to be a record flood. The past 24 hours have been very challenging for the residents of Lake County, as we respond to the flood. Once the waters recede, recovery, clean-up, and damage assessment will continue for weeks. It’s important to remember we are all in this together.”

Water levels marked on the Fox River, near New Munster, Wis. appear to be cresting at a stage of 17.4 feet, a two-foot increase over the previous 2013 flood level. As of July 14, Fox Lake’s gauge may crest over 8.2 feet, with current level at 6.01 feet, the McHenry Stratton Dam gauge expected to crest over 6.0 feet, and present levels at 4.21 feet.

“We’re monitoring the situation, and making site evaluations around the municipality,” said Bill Frazier, Fox Lake’s code enforcement officer. “Public works crews were on Eagle Point Road, which has a section that abuts Pistakee Lake, and placing sawhorses to locate the seawall edge.”

The village’s website has listed two additional sandbagging stations for both residential and commercial use: 98 Covington Road, and 17 Forest Ave. The materials are available at the Fox Lake Fire Protection District Station, located at 216 Washington Avenue in Ingleside.

An Illinois Department of Natural Resources update on the Fox River levels stated, “All gates at Stratton and Algonquin dams are opened. The dam in Burlington, Wis. has not breached. Burlington has experienced record flooding on the Fox River. The National Weather Service is forecasting one-half-inch of rain over the Fox River watershed (for the week beginning July 17). The Fox River, near New Munster, is forecasted to continue to fall, but it will be over one week before it falls below flood stage.

“This flow is higher than we have seen on the Chain, so our lake and river stage estimates are interpolated from our known information, but there is some uncertainty because we have nothing to historic record to compare.”

Rita Lee, IDNR’s senior public service administrator, noted, “The rain prediction is supposed to be scattered throughout the area, rather than concentrated, which will help. That is anticipated July 17. The best we can do, right now, is keep all the gates at the Stratton and Algonquin dams wide open. There will be significant flooding throughout the Fox River system. There’s no immediate data on the impact, at the southern end of the system.”

The William Stratton Dam, in McHenry, underwent renovations that were completed  November 2015. It encompassed the replacement of sluice gates for the dam, with torque tube gates designed to manage the water flow during normal levels. There is inadequate storage for water, during flood events, and the gates are employed to minimize the water damage on the system.

A 60-foot downstream lock extension with a new intake pipe were also constructed, but the gate structures will not be opened. The dam, and one at Algonquin, was constructed to maintain water pools sufficient for recreation on the river, and the Chain O’ Lakes area.

“The locks remained closed during flood events, and are strictly for boat passage,” said Lee.

One advantage to unimpaired river flow is the completion of the Charles Miller Road Bridge in McHenry. Improvements to expand the bridge roadway to accommodate four lanes of traffic necessitated temporary staging and abutments proved a detriment in the 2013 flood, as water flow was restricted by the narrower space, acting like a funnel. State officials denied the claim, although water levels remained high for the upper Chain O’ Lakes.

Fox Lake village officials and administrators met July 14 in afternoon sessions to meet the challenges of the municipality under a flood alert. The Fox Waterway Agency shut down the entire system to boating traffic on the same date, from the Wisconsin border to Algonquin Road, as a preventative measure from wake damage.

In McHenry County, Nunda Township and the village of Algonquin and Nunda Township sites have been severely inundated with flood waters. State officials said the Algonquin region of the Fox River normally drains 7,500 cubic feet of water per second, but flood waters are expected to add more than double the number.

“We are doing what we can, we have to see how the weather holds,” said Lee.