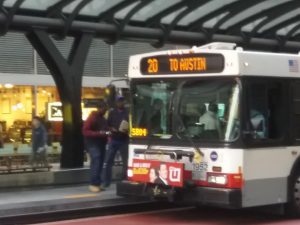 Commuters board a CTA bus on Madison Street in Downtown Chicago. The RTA, the umbrella organization over the CTA and other mass transit organizations, will be issuing $250 million in working cash notes due to state funding delays. (Kevin Beese/Chronicle Media)

RTA officials have approved $250 million in short-term borrowing and they are unabashedly pointing their fingers squarely at the state as the culprit.

A reduction in state funding for transit, the state’s backlog of bills and a newly instituted state surcharge on collecting sales-tax revenue have all caused a reduction of revenue for the RTA. The agency will sell working cash notes to keep cash flowing for operational expenses as it waits for state payments.

Members of the Regional Transportation Authority board of directors last week unanimously approved the working cash notes sale, but not without first blasting state officials for dropping their end of the bargain on boosting public transportation. The notes sale comes on the heels of a $1.5 million cut just last week in state funding to the agency.

“Springfield never ceases to amaze me,” said board Chairman Kirk Dillard, speaking from the experience of having been a state senator for 20 years. “… We’re facing significant reductions that have an impact on the services that our service boards can provide.”

The RTA is the umbrella organization over Metra, the Chicago Transit Authority and Pace.

“The 2 percent siphoning of the sales taxes, of not only the RTA but all units of local government, to me, is outrageous,” the board chairman said. “It is the state’s job to collect those taxes. To take 2 percent of the metropolitan region’s money for transit or our local communities’ money and shift it to bureaucrats in Springfield is just outrageous.”

“California and every other state in America is investing more and more and more in mass transit, while we face a nearly $100 million reduction,” Dillard said. “If you look at the criteria for Amazon (which is seeking a location for a second headquarters), mass transit was right at the top in its most important areas. 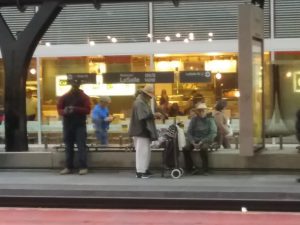 Commuters wait for a CTA bus in Downtown Chicago. Kirk Dillard, chairman of the board for the RTA, the umbrella organization over the CTA and other mass transit organizations, said Illinois foolishly is not putting money into mass transit efforts. (Kevin Beese/Chronicle Media)

“I always thought that a light bulb should go off. We do what Amazon does. Amazon moves packages in the most efficient rate in the world. They move packages; we move people.”

He said the RTA has repeatedly had the lowest cost per mile of any mass transit agency in the country, but still continues to struggle to get ample state funding.

“We’re just going backward here,” Dillard lamented. “Not only is the state reducing our funding, they are not even paying us what they should contribute for our economy to grow. This trend’s got to come to a head soon. There are significant consequences. You don’t face a $100 million reduction in funding for mass transit — most of it caused by the state of Illinois — without some repercussions.”

The four public transportation systems under the RTA — CTA, Metra, Pace and Pace ADA for para-transit service — are $19 million over budget at this point, with the CTA leading the way, being $14 million over budget, noted Bea Reyna-Hickey, chief financial officer for the RTA.

“Even with the good job the service boards are doing, there is a $19 million problem we are looking at,” director Dwight Magalis said.

Reyna-Hickey noted that the $250 million issuing of working cash notes will put the agency at its short-term borrowing capacity of $400 million. She said the state owes the RTA $458 million.

—- RTA: State is off track with funding cuts  —